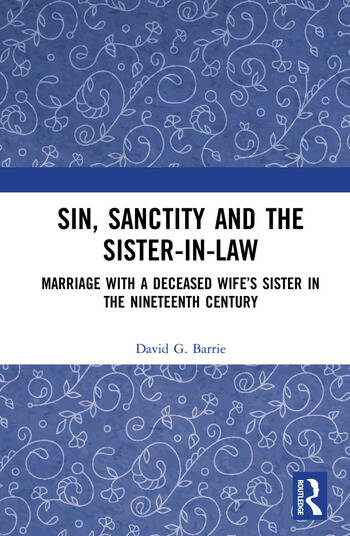 Sin, Sanctity and the Sister-in-Law: Marriage with a Deceased Wife’s Sister in the Nineteenth Century

This is the first book specifically devoted to exploring one of the longest-running controversies in nineteenth-century Britain – the sixty-five-year campaign to legalise marriage between a man and his deceased wife’s sister. The issue captured the political, religious and literary imagination of the United Kingdom. It provoked huge parliamentary and religious debate and aroused national, ecclesiastical and sexual passions. The campaign to legalise such unions, and the widespread opposition it provoked, spoke to issues not just of incest, sex and the family, but also to national identity and political and religious governance.

Introduction 1. ‘A Passage in Our History which We Could not Look back upon without Shame’: The Roots of Discontent, c.1835-1848 2. Restraining the ‘Devil in Our Sisters’: James Wortley’s Marriage Affinity Bills, 1849-1851 3. The ‘Misery of Scotch Law’: Legal Precedents, Political Discourses and Literary Representations, c.1851-1862 4. ‘Sleeping while the Enemy is Busy Sowing His Tares.’ The Challenge to Scripture, c.1851-1888 5. ‘The Man is Everything, and the Woman Nothing’: Protecting, Purifying and Conceptualising the Family, 1862-1888 6. ‘It is Too Readily Assumed that all Those Who are Opposed to this Kind of Marriage are Idiots’: Public Opinion, Party and Personal Conscience, 1869-1906 7. ‘It is Time this Controversy should End’: Reform and Reaction, 1907 Conclusion: A Woman’s Question, a Man’s Need, a Class’s Interest?

David G. Barrie is Associate Professor of History at The University of Western Australia. He is series editor of Palgrave Histories of Policing, Punishment and Justice. His recent publications include (with Susan Broomhall) Police Courts in Nineteenth-Century Scotland, in two volumes (Farnham, 2014).

Sin, Sanctity and the Sister-in-Law: Marriage with a Deceased Wife’s Sister in the Nineteenth Century