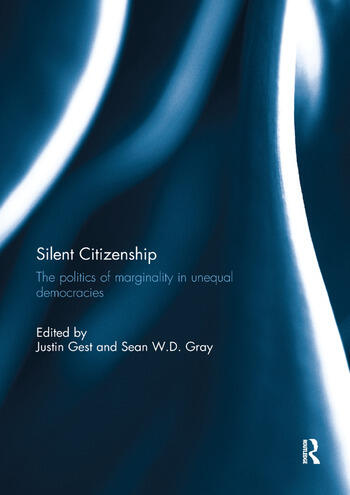 Silent Citizenship: The Politics of Marginality in Unequal Democracies

What does silent citizenship mean in a democracy? With levels of economic and political inequality on the rise across the developed democracies, citizens are becoming more disengaged from their neighbourhoods and communities, more distrustful of politicians and political parties, more sceptical of government goods and services, and less interested in voicing their frustrations in public or at the ballot box. The result is a growing number of silent citizens who seem disconnected from democratic politics – who are unaware of political issues, lack knowledge about public affairs, do not debate, deliberate, or take action, and most fundamentally, do not vote. Yet, although silent citizenship can and does indicate deficits of democracy, research suggests that these deficits are not the only reason citizens may have for remaining silent in democratic life. Silence may also reflect an active and engaged response to politics under highly unequal conditions. What is missing is a full accounting of the problems and possibilities for democracy that silent citizenship represents. Bringing together leading scholars in political science and democratic theory, this book provides a valuable exploration of the changing nature and form of silent citizenship in developed democracies today. This title was previously published as a special issue of Citizenship Studies.

2. Solace for the Frustrations of Silent Citizenship: the Case of Epicureanism
Jeffrey Edward Green

4. Domination, global harms, and the problem of silent citizenship: toward a republican theory of global justice
James Bohman

5. Pro- and anti-system behavior: a complementary approach to voice and silence in studies of political behaviour
Justin Gest

7. Silent citizenship among Asian Americans and Latinos: opting out or left out?
Justin A. Berry and Jane Junn

Justin Gest is Assistant Professor of Public Policy in the Schar School of Policy and Government at George Mason University, USA. His research examines minority political behavior and comparative immigration policy. He is the author of Apart: Alienated and Engaged Muslims in the West (2010) and The New Minority: White Working Class Politics in an Era of Immigration and Inequality (2016).

is a SSHRC Postdoctoral Fellow at the Ash Center for Democratic Governance and Innovation, Harvard University, USA. His dissertation and current book project, Democracy and Silence, theorizes the conditions under which silence can be a form of political engagement. His research and teaching interests include contemporary democratic theory, theories of the welfare state, deliberation, and new forms of political representation.

Silent Citizenship: The Politics of Marginality in Unequal Democracies