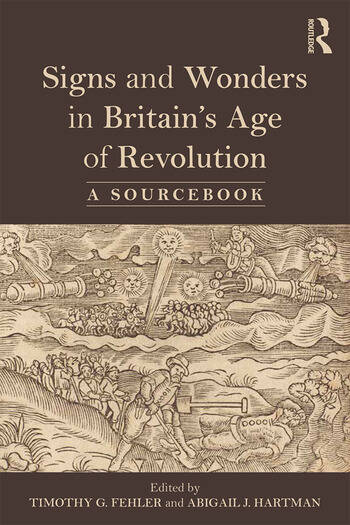 Signs and Wonders in Britain’s Age of Revolution: A Sourcebook

Signs and Wonders in Britain’s Age of Revolution is an original collection of primary sources from the era encompassing the political, religious, and social tumult of the English Civil War.

With a focus on Britain in the seventeenth century and covering topics such as astrology, scurrilous pamphlet wars, witch-hunts and trials, and the execution of King Charles I, Signs and Wonders investigates published "strange and true" accounts that existed alongside more traditionally studied historical events.

Including fully edited and annotated texts of carefully selected popular pamphlets, the sourcebook is accompanied by guided introductory essays for each of the thematically divided chapters. With more than two dozen woodcut images, Signs and Wonders enables students to pursue in-depth primary source analysis of this rich period of history, when the supernatural was woven into the lives of those participating in or viewing the tumultuous political and religious events of the mid-17th century.

In this collection of popular pamphlets, battles in the sky, witches, monstrous births, and apparitions stand side-by-side with the major political and religious events that make up the standard histories of the era, allowing a fuller perspective on these early modern narratives and their interpretation (and exploitation) by the heated presses of 17th-century Britain. Signs and Wonders in Britain’s Age of Revolution is essential reading for all students of early modern Britain.

The Supernatural in the English Revolution

Witchcraft in the English Civil War

Documents in the Collection

Notes on the Illustrations, Transcriptions, and Editorial Conventions

Chapter 7. The Removal of the King: ‘Innocent Blood calls for vengeance’

Timothy G. Fehler is Professor of History at Furman University. His previous books include Poverty and Protestantism: The Evolution of Social Welfare in Sixteenth-Century Emden (1999), and Religious Diaspora in Early Modern Europe: Strategies of Exile (2014).

Signs and Wonders in Britain’s Age of Revolution: A Sourcebook