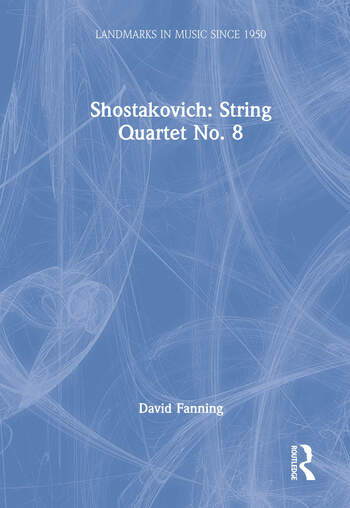 When it was first performed in October 1960, Shostakovich's Eighth String Quartet was greeted with a standing ovation and given a full encore. Its popularity has continued to the present day with over a hundred commercial recordings appearing during the last 40 years. The appeal of the work is not hard to identify; immediately communicative, the quartet also contains rich seams of deeper meaning. This book is the first to examine its musical design in detail and seeks to overthrow the charges of superficiality that have arisen as a result of the work's popular success. The core of this study is the close analysis of the work, but this is placed in context with a discussion of Shostakovich's reputation and historical position, the circumstances of the quartet's composition and the subsequent controversies that have surrounded it. The work was composed during the so-called 'Thaw' years of the Soviet Union, and the cultural and political backgrounds of this period are considered, together with Shostakovich's life and work during this time. David Fanning argues persuasively that the Eighth String Quartet is a landmark in twentieth-century music in its transcendence of the extra-musical meanings that it invokes; that it is 'music that liberates itself from the shackles of its context'. The book features an accompanying CD of the work.

David Fanning is Professor at Manchester University Music Department, where he also studied. He has pursued a combined career as scholar, performer, broadcaster and journalist. Prof. Fanning is an authority on Russian and Scandinavian music, with two books on Shostakovich (The Breath of the Symphonist, RMA Monograph, 1998, and, as contributor-editor, Shostakovich Studies, CUP, 1995) and numerous articles and chapters in edited books.

'Shostakovich confessed that while composing his Eighth String Quartet, "in memory of myself . . . my tears flowed as abundantly as urine after downing half a dozen beers" (letter to Isaac Glikman, 19 July 1960). Rife with self-quotations and thematic allusions, the quartet's music invites an attempt to understand what it must have meant to the composer and why it speaks so poignantly to listeners. David Fanning resists diminishing the work to musically encoded autobiography, primarily dependent for its power to move an audience on biographical, social, and political associations. He addresses these issues, but then foregrounds the music, carefully identifying the sources and extra-musical meanings invoked by the quartet's web of thematic ideas. Finally, he argues eloquently that the work "liberates itself from the shackles of its contexts" and rises to the realm of transcendent artwork. Shostakovich certainly thought so. After playing through his completed quartet several times, he declared, "Again the tears flowed . . .[but] this time . . . from surprise at the work's remarkable formal integrity" (letter to Glikman). Thanks to David Fanning's insights, I now listen to the Eighth Quartet with renewed appreciation.' Malcolm Hamrick Brown, Founding Editor of the series Russian Music Studies, Indiana University Press 'The general standard of production is first class, and the plan is clearly structured and imaginatively laid out, both in design and on the page. The music is put into the context of the composer's life and times, and there is a thorough and detailed analysis of the quartet... There is even an accompanying CD featuring an excellent performance by the Rosamunde quartet... this book [...] does justice to one of the greatest works in the chamber music literature of the 20th century.' Musicweb 'With admirable consistency of treatment, close analysis is combined with historical and social context, and where appropriate, literary discussion. The texts themselves are enhanced by extensive and clearly printed musical illustrations and, as a helpful bonus, CDs of the music come too... [a] fine study...' The Musical Times