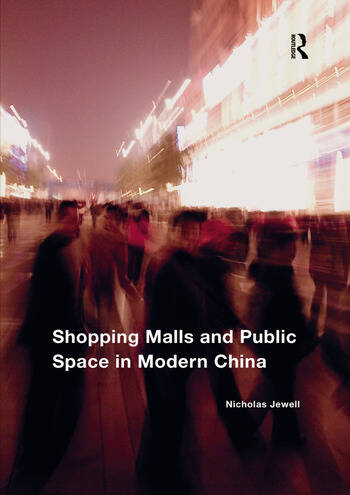 China’s rise as an economic superpower has been inescapable. Statistical hyperbole has been accompanied by a plethora of highly publicized architectural forms that brand the regeneration of its increasingly globalized urban centres. Despite the sizeable body of literature that has accompanied China’s modernization, the essence and trajectory of its contemporary cityscape remains difficult to grasp. This volume addresses a less explored aspect of China’s urban rejuvenation - the prominence of the shopping mall as a keystone of its public spaces. Here, the presence of the built form most representative of Western capitalism’s excess is one that makes explicit the tensions between China’s Communist state and its ascent within the ’free’ market. This book examines how these interrelationships are manifested in the culturally hybrid built form of the shopping mall and its role in contesting the ’public’ space of the modern Chinese city. By viewing these interrelationships as collisions of global and local narratives, a more nuanced understanding of the shopping mall typology is explored. Much architectural criticism has failed to address the levels of meaning implicit within the shopping mall, yet it is a building type whose public popularity has guaranteed its endurance. Consequently, if architecture is to remain a relevant social art, a more holistic understanding of this phenomenon will be indispensable to the process of adapting to globalizing forces. This examination of Chinese shopping malls offers a timely and relevant case study of what is happening in all our cities today.

Nicholas Jewell is a practicing architect in London, UK, and completed a PhD at the Bartlett School of Architecture, UCL, on shopping malls and urbanism in China in 2013. Related research, on the hybridisation of Chinese models of the shopping mall on British shores was the subject of an RIBA Research Trust Award in 2010. He won the RIBA Dissertation Prize in 2000 for an essay on British malls subsequently published in The Journal of Architecture (2001). He has lectured widely on the subject of shopping malls and contributed to a number of publications, including a chapter on Dubai’s shopping malls in Architecture and Globalisation in the Persian Gulf Region (2013).

’This is a fascinating account of the emergence of Chinese shopping malls, explaining the evolution of architectural forms as well as peculiar contexts of cultural and consumption practices in China. Nicholas Jewell illuminates the social and spatial production of distinctive architecture in the Chinese consumerist society.’ Fulong Wu, University College London, UK ’This is a highly original and lucidly written book spanning architecture, urban studies and social theory. Forging new understandings of both the shopping mall and the Chinese city, it links the evolution of this problematic building type to an emerging Chinese nationalism, lifestyle and class structure. Highly recommended reading.’ Kim Dovey, University of Melbourne, Australia; author of Framing Places and Becoming Places