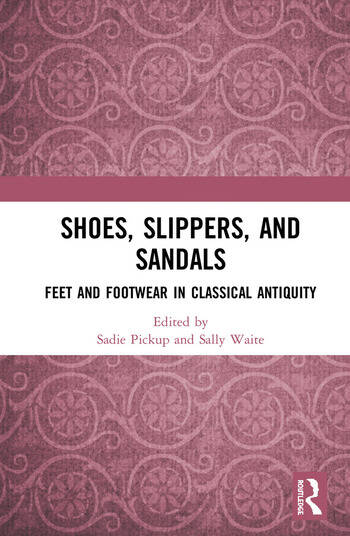 Shoes, Slippers, and Sandals: Feet and Footwear in Classical Antiquity

This edited volume groups research on the significance of ancient feet and footwear, much of which was presented, discussed and reviewed at the conference: Shoes, Slippers and Sandals: Feet and Footwear in Antiquity, held at Newcastle University and the Great North Museum from 29 June–1 July 2015.

Ancient dress and adornment have received significant consideration in recent scholarship, though, strikingly, feet and footwear have featured relatively little in this discussion. This volume aims to rectify this imbalance through its fifteen chapters covering a wide range of aspects associated with feet and footwear in classical antiquity. Contributions are grouped under four headings: ‘Envisaging footwear’, ‘Following footprints’, ‘One from a pair’ and ‘Between representation and reality’, reflecting the broad range and interdisciplinary nature of the approaches undertaken.

Part 1: Envisaging Footwear
1) Sally Waite and Emma Gooch – Sandals on the Wall: The Symbolism of Footwear on Athenian Painted Pottery
2) Valérie Toillon – At the Symposium: Why Take Off Our Boots? The Significance of Boots Placed Underneath the Kline on Attic Red-Figure Vases (c. 480-450 BC)
3) Yael Young – Donning Footwear: The Invention and Diffusion of an Iconographic Motif in Archaic Athens
4) Christiaan Caspers – Pantāi Krēpides: Shoe-Talk from Homer to Herodas

Part 3: One from a Pair
8) Amy Smith – The Left Foot Aryballos Wearing a Network Sandal
9) Sue Blundell – One Shoe Off and One Shoe On: The Motif of Monosandalism in Classical Greece
10) Sadie Pickup – A Slip and a Slap: Aphrodite and her Sandals
11) Charlotte Chrétien – Achilles’ Discovery on Skyros: Status and Representation of the ‘Monosandalos’ in Roman Art

Part 4: Between Representation and Reality
12) Annika Backe-Dahmen – Sandals for the Living, Sandals for the Dead: Roman and Their Footwear
13) Eva Christof – The Footwear of the Antonine Monument from Ephesus
14) Alex Croom – A ‘Shoe’ Brooch from Roman Fort at South Shields
15) Elizabeth M. Greene –Metal Fittings on the Vindolanda Shoes: Footwear and Evidence for Podiatric Knowledge in the Roman World

Sadie Pickup is currently a lecturer at the University of Reading, UK, having previously taught at Christie’s Education, London/University of Glasgow, UK. She has also worked at the Ashmolean Museum, Oxford, UK. She completed her DPhil in Classical Archaeology at Oxford in 2012 and has since published on this subject. She co-edited Brill’s Companion to Aphrodite (2010) and was lead author for Volume 30 of the Corpus of Cypriote Antiquities series: Cypriote Antiquities in Reading, The Ure Museum at the University of Reading and the Reading Museum (Reading Borough Council), published in 2015. Her book: The Life and Afterlife of the Knidian Aphrodite: From Ancient to Modern, is forthcoming.

Sally Waite is a lecturer in Greek Art and Archaeology at Newcastle University, UK. She has worked extensively with the Shefton Collection of Greek and Etruscan Archaeology in the Great North Museum, UK, and is joint editor of On the Fascination of Objects: Greek and Etruscan Art in the Shefton Collection (2016). Her research is primarily on Attic red-figure pottery and she has a particular interest in the history of collecting. She has published on the Kent Collection: Acquiring Antiquity: Greek and Cypriot Pottery from the Harrogate Collection (2014) and ‘Ancient art in a museum context: the Kent Collection in Harrogate’ in Greek Art in Context edited by Diana Rodríguez Pérez (Routledge 2017).

Shoes, Slippers, and Sandals: Feet and Footwear in Classical Antiquity