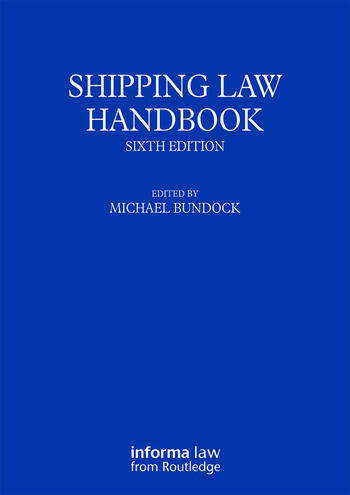 Anyone who deals with shipping disputes requires access to a mass of source materials. These include international conventions, statutes and statutory instruments, arbitration rules, and the most commonly encountered bills of lading, charterparties, insurance clauses, guarantees and other contracts. Details of the parties to the international conventions are also required. The Shipping Law Handbook collects all this material in one convenient and easy-to-use volume.

The Handbook deals with the following areas:

Each section has an introduction which gives a brief overview of the materials included, setting them in their context, and noting probably future developments.

The Handbook has been fully revised for this sixth edition. New items include: the European Judgments Regulation (Recast) 2012, the LMAA Terms 2017, the Insurance Act 2015, the York-Antwerp Rules 2016, the Inter-Club Agreement 1996 (amended 2011), Barecon 2017, Congenbill 2016, NYPE 2015 and updated lists of parties to international conventions.

The Handbook is a highly practical work, which anyone involved in shipping will wish to keep conveniently to hand. It is an essential reference work for shipping lawyers, arbitrators, P&I Clubs and their correspondents, shipowners, ship masters, agents and brokers.

MICHAEL BUNDOCK is a member of the Marine and International Trade group at Stephenson Harwood.

...a comprehensive Handbook of the statutes, statutory instruments, international convention, arbitration rules and standard shipping documents most frequently (and generally) relied on in both the study and practice of contentious shipping law.

...the handbook includes an invaluable introduction for each part on the critical issues arising within the area of practice to which part relates, imparted from the author’s own extensive experience.

Whilst the book is firmly focused on practicality and is amed at legal and trade practitioners, it is also a useful source of reference for law students, who often lack an awareness of the ‘real’ shipping world in which the law they are studying is applied.

All in all, it provides a superb collection of the materials essential to the busy shipping practitioner’s life and which students coming to this area should be familiar.