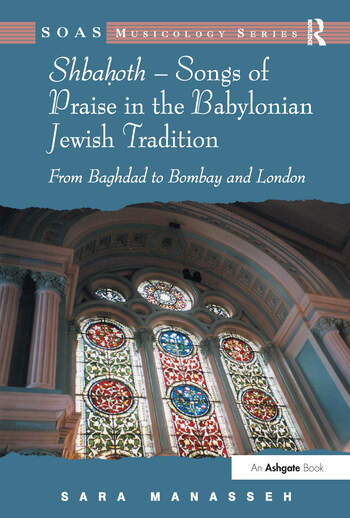 Shbahoth – Songs of Praise in the Babylonian Jewish Tradition: From Baghdad to Bombay and London

Sara Manasseh brings a significant, but less widely-known, Jewish repertoire and tradition to the attention of both the Jewish community (Ashkenazi, Sephardi, Oriental) and the wider global community. The book showcases thirty-one songs and includes English translations, complete Hebrew texts, transliterations and the music notation for each song. The accompanying CD includes eighteen of the thirty-one songs, sung by Manasseh, accompanied by 'ud and percussion. The remaining thirteen songs are available separately on the album Treasures, performed by Rivers of Babylon, directed by Manasseh - : www.riversofbabylon.com. While in the past a book of songs, with Hebrew text only, was sufficient for bearers of the tradition, the present package represents a song collection for the twenty-first century, with greater resources to support the learning and maintenance of the tradition. Manasseh argues that the strong inter-relationship of Jewish and Arab traditions in this repertoire - linguistically and musically - is significant and provides an intercultural tool to promote communication, tolerance, understanding, harmony and respect. The singing of the Shbahoth (the Baghdadian Jewish term for 'Songs of Praise') has been a significant aspect of Jewish life in Iraq and continues to be valued by those in the Babylonian Jewish diaspora.

Dr Sara Manasseh is an ethnomusicologist, lecturer and performer of music in the Babylonian Jewish (Iraqi) tradition. She is the founder director of the musical ensemble, Rivers of Babylon (London). Her publications include articles on music in religious and life-cycle events in the Babylonian Jewish tradition. Her doctoral dissertation focused on the role of Iraqi Jewish women in music performance (London 1999). Sara was born in Bombay (now Mumbai), and moved to London in 1966. Her family, originally from Baghdad, settled in Bombay during the nineteenth and twentieth centuries.

'Sara ManassehÂ´s Shbahoth is a wonderful anthology of hymns sung by Iraqi Jews and a window into the musical and religious life of this ancient community. It comes along at a time when this aspect of middle-Eastern Jewish popular culture has joined with Jewish and Israeli popular culture, thereby gaining an unexpectedly wide audience. The twenty-five poems included in the book are accompanied by translations and all the historical and literary information needed for their full enjoyment and understanding.' Raymond Scheindlin, Professor of Medieval Hebrew Literature at The Jewish Theological Seminary, USA 'Shbahoth - Songs of Praise in the Babylonian Jewish Tradition, which is part of the SOAS Musicology Series, demonstrates linguistic and musical prowess covering Hebrew, Arabic, and English, as well as musical and textual mastery.' The Journal of Indo-Judaic Studies

Shbahoth – Songs of Praise in the Babylonian Jewish Tradition: From Baghdad to Bombay and London