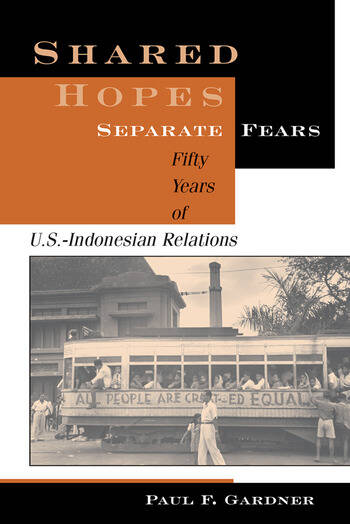 This book traces the often tumultuous history of U.S-Indonesian relations as experienced by those who witnessed it in the making. Incorporating the perspectives of participants from both nations, Paul Gardner focuses on a number of key phases in the relationship: the U.S. role in Indonesia's struggle for independence; the strains of the Cold War era, including covert U.S. support for Indonesian rebels in Sumatra and Sulawesi; U.S. mediation of the dispute over western New Guinea; the communist ?coup? in 1965 and its violent aftermath; and the crucial U.S. role in organizing a multinational recovery effort for Indonesia's economy after the creation of its New Order in 1968. The book also addresses current issues, including economic differences, democratic development, and East Timor, and other human rights concerns.Gardner, himself a witness of key events, draws on interviews, personal papers, and recently declassified documents to provide an intimate view of the aspirations, insights, and acts of courage that built the Indonesian relationship; the fears, intrigue, and blunders that threatened it; and the complex issues the two nations face today.

List of Illustrations, Foreword, Preface, Acknowledgments, The United States-Indonesia Society, First Encounters, Images of Colonialism, The Economics in Political Images, Battlefield Bonds, The Dilemma of a Concerned Bystander, Notes, Tests of Trust and Resolve, An Old Hand in a Changed Land, “Economic Cooperation” with an Embargo, The Illusion of Shared Sovereignty, Moving to a Larger Stage, Notes, Between Friends Who Are Enemies, The View from Kaliurang, Rough Political Seas Aboard the USS Renville, The Indonesian View from New York and Washington, The Conversion of Coert duBois, Bad Relations in the Good Offices Negotiations, Putting Indonesia on Americans' Map, Notes, Insurrection, Invasion, and Independence, Cochran in Command, Between Colonialism and Communism, Prelude to an Invasion, “Police Action” and the Security Council, From the Round Table to a Unitary State, Notes, Indonesian Unity and the Cold War, Economic Aid and Mutual Security, The Perils of Secret Diplomacy, Notes, The Dulles Brothers and Sukarno, Nonalignment, New Guinea, and National Unity, Steps Forward and Backward, Sukarno in the United States and China, Notes, A Costly “Covert” Operation, A New Indonesian Cabinet, a New U.S. Ambassador, and Their Difficult Bosses, Outer Island Dissidents and the CIA, U.S. Policy's Public Image, The Collapse of the Sumatran Rebellion, The Bombing of East Indonesia and a Change in U.S. Policy, Picking Up the Pieces, Notes, Kennedy, Johnson, and Sukarno's “Continuing Revolution'', Handling West Irian and Sukarno, Confronting Malaysia, Analyzing Sukarno, A Year of Living Dangerously for Anticommunists and Americans, Building Bonds at the Worst of Times, Notes, The Brink of Chaos, The PKI in the Cities and the Countryside, The PKI and the Army, A U.S. Reassessment, The Revolution's Crescendo, The September 30 Affair, Turmoil in a Power Vacuum, A Low Profile in an Uncertain Period, Killings in the Countryside, Showdown in Jakarta, Notes, Entering a New Order and a New Relationship, Establishing Economic Ties in a Shifting Political Environment, The Final Showdown, Biting the Economic Bullet, Institutionalizing the Low U.S. Profile: Multilateral Aid, Notes, Different Routes to Common Goals, Narrowing Differences in Worldviews, An Issue of Law-and Geography-and Security-and Economics, Profit and Problems from Trade and Investment, Human Rights: Communal and Individual, Internal Stability and Democratic Development, Internal Stability and Democratic Development, Notes, About the Book and Author, Index