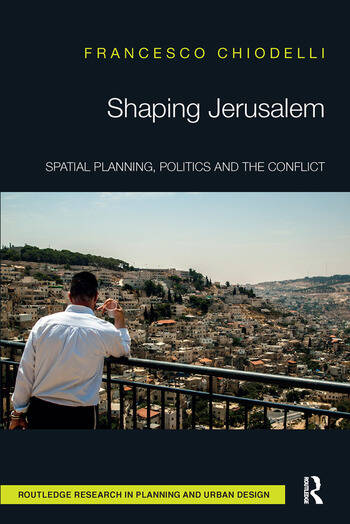 Shaping Jerusalem: Spatial planning, politics and the conflict focuses on a hidden facet of the Israeli-Palestinian conflict; the relentless reshaping of the Holy City by the Israeli authorities through urban policies, spatial plans, infrastructural and architectural projects, land use and building regulations. From a political point of view, the Israeli-Palestinian conflict may appear to be at an impasse; however, it is precisely by looking at the city’s physical space that one can perceive that a war of cement and stone is under way.

Many books have been written on the Israeli-Palestinian conflict over Jerusalem; some of them have focused on the urban fabric; Shaping Jerusalem uniquely discusses the role of Israeli spatial actions within the conflict. It argues that Israel’s main political objective – control over the whole city – is ordinarily and silently pursued through physical devices which permanently modify the territory and the urban fabric.

Relying on strong empirical evidence and data through the analysis of statistical data, official policies, urban projects, and laws, author Francesco Chiodelli substantiates the political discussion with facts and figures about the current territorial situation of the city, and about the Israeli policies implemented in the city in the past six decades.

1. The spatial dimension of the Israeli-Palestinian conflict over Jerusalem

2. The occupied city: planning the occupation of East Jerusalem

4. The locked city: the separation Barrier as territorial strategy

5. The lesson of Jerusalem

Francesco Chiodelli is a researcher at the Gran Sasso Science Institute (Italy), where he teaches on the doctoral programme in Urban Studies. His research deals with the social effects of space regulation, with a specific focus on problems of tolerance, informality and transgression. His papers have appeared in several international scientific journals, such as Planning Theory, Town Planning Review, Land Use Policy, Geoforum, Journal of Urban Affairs, European Planning Studies, Cities and Urban Research and Practice.