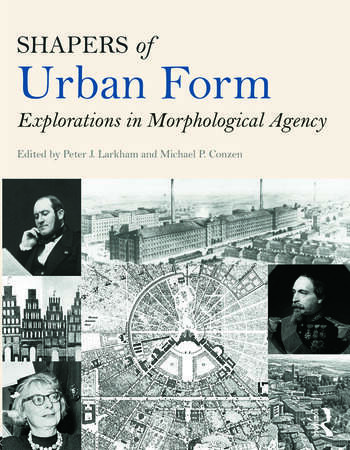 People have designed cities long before there were urban designers. In Shapers of Urban Form, Peter Larkham and Michael Conzen have commissioned new scholarship on the forces, people, and institutions that have shaped cities from the Middle Ages to the present day.

Peter J. Larkham has authored more than sixty papers for refereed journals, edited three books for Routledge, and authored Conservation and the City (1996) and edited theme issues of Town Planning Review and Built Environment. He is associate editor of Urban Morphology and has recently served as associate editor of Planning Perspectives. He is professor of planning at Birmingham City University, UK.

is professor of geography at the University of Chicago, USA, where he has taught urban and historical geography since 1976. He is the author and editor of more than a dozen books, including World Patterns of Modern Urban Change (1986), A Scholar’s Guide to Geographical Writing on the American and Canadian Past (1993), Thinking About Urban Form (2004), and The Making of the American Landscape (2nd ed.), 2010).