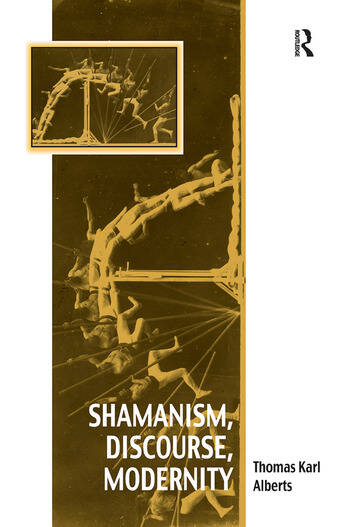 Shamanism, Discourse, Modernity considers indigenous peoples’ struggles for human rights, anxieties about anthropocentric mastery of nature, neoliberal statecraft, and entrepreneurialism of the self. The book focuses on four domains - shamanism, indigenism, environmentalism and neoliberalism - in terms of interrelated historical processes and overlapping discourses. In doing so, it engages with shamanism’s manifold meanings in a world increasingly sensitive to indigenous peoples’ practices of territoriality, increasingly concerned about humans’ integral relationship with natural environments, and increasingly encouraged and coerced to adjust self-conduct to comport with and augment government conduct.

Thomas Alberts was born and educated in Cape Town, South Africa, where he held various roles at the Institute for Comparative Religion in Southern Africa, University of Cape Town and the Human Sciences Research Council. He completed his PhD at SOAS, University of London.

’This brilliant book treats shamanism as a total social fact - religious, political, and economic - embedded in modern discourses of subjectivity and alterity. Against representations of shamanism as pre-modern or anti-modern, Thomas Alberts locates shamanism at the center of crucial mediations of modernity.’ David Chidester, University of Cape Town, South Africa ’Shamanism, Discourse, Modernity offers a masterful analysis and critique of the ways and means by which disparate local religious idioms have been transformed into a globalised new world religion named shamanism�. It brings into sharp relief the social forces that shape and drive this transformation, drawing out the connections and ruptures which run between colonialism, neoliberalism, and environmentalism and which have been instrumental in the discursive history of shamanism�. The geographic and intellectual terrain that Alberts travels provides us with an absorbing and acute account of the divided and conflicted nature of global modernity that lies at the heart of shamanism discourse and its various figurations of the shaman. As such it makes a truly important contribution to lively debates in religious studies concerned with indigenous religion, the politics of representation, colonialist and neo-colonialist appropriations of nativist life-worlds, contemporary governmentality, the commodification of spirituality�, and the problematic nature of claims to authenticity that co-opt a variety of actors and practices in the service of both commercial enterprise and apparently empathetic scholarship. The implications of Alberts' work for the study of shamanism are far-reaching and potentially transformative. More than this though, Shamanism, Discourse, Modernity is a must-read for anyone concerned with the deeply political, interested nature of intellectual categories as they intersect with social forces. It is an outstanding achievement.’ SÃ®an Hawthorne, SOAS, University of London, U