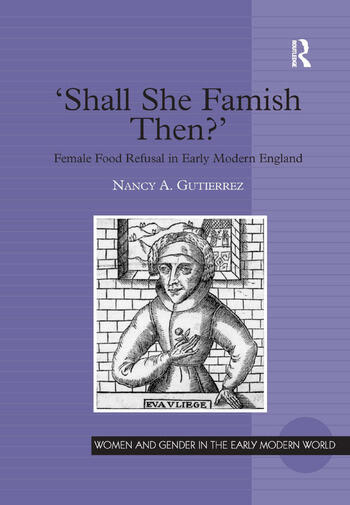 'Shall She Famish Then?': Female Food Refusal in Early Modern England

Nancy Gutierrez's exploration of female food refusal during the early modern period contributes to the ongoing conversation about female subjectivity and agency in a number of ways. She joins such scholars as Gail Kern Paster, Jonathan Sawday, and Michael Schoenfeldt, who locate early modern ideas of selfhood in the age's understanding of the body and bodily functions, that is, the recognition that behavior and feelings are a result of the internal workings of the body. Exploring the portrayals of the anorectic woman in the work of Ford, Shakespeare, Heywood and others and arguing that the survival of these women undermines regulatory policies exercised over them by those in authority, Gutierrez here demonstrates how female food refusal is a unique demonstration of individuality. The chapters of this book reveal how the common cultural association of women and food manifests itself in the early modern period-not as religious expression, which is the medieval representation, and not as an expression of dysfunctional adolescence and maturation, our own contemporary view, but rather as a trope in which the female body is a site of political apprehension and cultural change. This study is neither a history nor a survey of the anorectic female body in early modern England, but rather individual yet related discussions in which the starved female body is seen to signify certain (un)expressed tensions within the culture.

Contents: Epigraph; Dedication; Preface; Contexts and methodologies; The public rendering of Margaret Ratcliffe's death; Fasting and prayer in A Woman Killed with Kindness: religious salvation and political resistance; 'Starved; starved': anatomy and food refusal in John Ford's The Broken Heart; 'The Maiden neither eate nor drank one morsel or droppe': miracle maidens as colonial objects; Epilogue: 'What, sir, ... can I do? I have no appetite'; Appendix I: Inscription on the tomb of Margaret Ratcliffe; Appendix II: The deaths of Queen Elizabeth I and Lady Arbella Stuart; Appendix III: Chronological listing of descriptions of Miracle Maidens, published in England 1589-1677; Bibliography; Index.

'...surprises and convinces simultaneously. Finding examples in the popular drama, in pamphlet literature, and in accounts of historical figures, Gutierrez relates female food refusal to ideology, gender, and cultural struggle. What we have imagined a modern issue and named anorexia turns out to be a startling example of how deeply the roots of our own culture are embedded in the pre-modern world and, at the same time, of how great are the differences between the two. ... A fascinating and informative study of a struggle for control of the female body.' Barbara Traister, Professor of English, Lehigh University This interesting book charts important new ground by distinguishing the particular ambiguity of early modern cases of female food refusal (from medieval or modern ones). Its innovative focus opens up intriguing readings of new material and familiar texts, drawing on areas as diverse on post-colonial theory and early modern religious politics to offer analyses which are subtle and often surprising ... Gutierrez offers an important modification to gendered binary oppositions of active subject and passive object.' Alison Findlay, Reader in Renaissance Drama, University of Lancaster '... compelling study... Drawing on a wealth of diverse material, from pamphlets, dramatic literature, and private correspondence... ' Sixteenth Century Journal

'Shall She Famish Then?': Female Food Refusal in Early Modern England