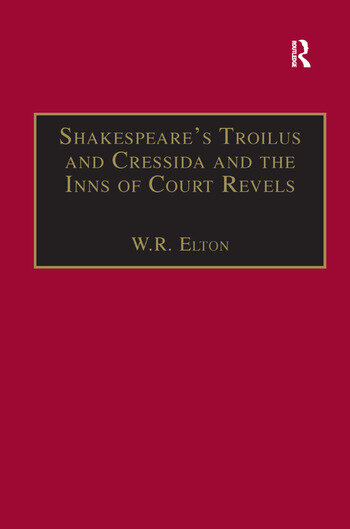 Shakespeare’s Troilus and Cressida and the Inns of Court Revels

’No one of Shakespeare’s plays is harder to characterize’, said Coleridge of Troilus and Cressida. Over the centuries, generations of critics have faced the challenge of determining exactly what sort of play Shakespeare’s Troilus and Cressida is. Described by Victorian commentators as ’dark’, ’decadent’ and ’bitter’, the work has, until now, retained its designation as a ’problem play’. In this ground-breaking study, leading Shakespeare scholar, W R Elton attempts to dismantle this presumption. His research places the play in the historical context of the Inns of Court law-revels tradition. By close analysis of the text, Elton demonstrates his belief that Troilus and Cressida was written specifically for an audience of law students and lawyers and that the play manifests many elements of a law-revel, including misrule, inversion, mock rhetoric and logic, and mock trials. In so doing, he provides explanations for many of the puzzling and mysterious elements that have previously baffled critics.

’an important contribution to the understanding of Troilus and Cressida.’ Professor Eugene M Waith, Yale University. ’He (Elton) analyzes situation, characters, dialogue, interchanges and debates ... to demonstrate how these were chosen because of their special appeal to the audience that had commissioned Shakespeare’s work. One cannot doubt his proof.’ G M Pinciss, Professor of English, Hunter College, CUNY.

Shakespeare’s Troilus and Cressida and the Inns of Court Revels