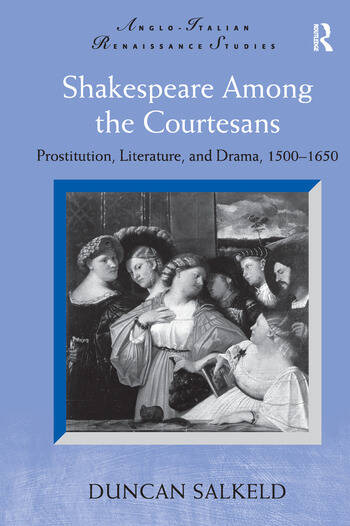 Shakespeare Among the Courtesans: Prostitution, Literature, and Drama, 1500-1650

Courtesans - women who achieve wealth, status, or power through sexual transgression - have played both a central and contradictory role in literature: they have been admired, celebrated, feared, and vilified. This study of the courtesan in Renaissance English drama focuses not only on the moral ambivalence of these women, but with special attention to Anglo-Italian relations, illuminates little known aspects of their lives. It traces the courtesan from a wry comedic character in the plays of Terence and Plautus to its literary exhaustion in the seventeenth-century dramatic works of Dekker, Marston, Webster, Middleton, Shirley and Brome. The author focuses especially on the presentation of the courtesan in the sixteenth century - dramas by Shakespeare, Marlowe, and Lyly view the courtesan as a symbol of social disease and decay, transforming classical conventions into English prejudices. Renaissance Anglo-Italian cultural and sexual relations are also investigated through comparisons of travel narratives, original source materials, and analysis of Aretino's representations of celebrated Italian courtesans. Amid these fascinating tales of aspiration, desire and despair lingers the intriguing question of who was the 'dark lady' of Shakespeare's sonnets.

Duncan Salkeld is Reader in Shakespeare Studies at The University of Chichester, UK.

'Subtle in its readings, scrupulous in its scholarship, and sophisticated in its theoretical understandings, Duncan Salkeld's Shakespeare Among the Courtesans is as interesting and provocative as its title promises. The book is an impressive work of both literary and social history, alertly tracing the figure of the courtesan as it reappears in early modern literary works, while agilely acknowledging the complex play of these imaginative reinscriptions of a social reality with the actual lives of women in the period.' David Scott Kastan, Yale University, USA 'This is a rare combination of scholarship and pleasure - it manages to make a highly significant contribution to the field while, at the same time, being a good read.' Deborah Cartmell, De Montfort University, UK '... the eye-opening strength of Salkeld’s book is the analysis and quotations from the Bridewell Court Records... I recommend it for its insights into this largely hidden area of life in Shakespeare’s England.' The Shakespeare Blog '... Duncan Salkeld’s Shakespeare Among the Courtesans is supremely approachable. Written in fluent prose, it is useful as a concise amalgamation of a huge amount of material from Renaissance Italy and England on a single topic... Salkeld’s effective engagement with early modern drama proves the most valuable element of his work.' Times Literary Supplement 'Salkeld has mined classical, Italian Renaissance and British documentary and literary sources, many of them archival and neglected, in a wide-ranging and informative investigation of the part played by the figure of the courtesan - roughly defined as a high class whore - in life and literature... His scrupulously detailed investigations throw up facts and ideas that cast a fresh light on the drama of the period.' Stanley Wells in Around the Globe '... this is a well-researched, lucidly written, and compelling book.' Studies in English Literature 1500-1900 '... the book’s strength is that it is packed

Shakespeare Among the Courtesans: Prostitution, Literature, and Drama, 1500-1650