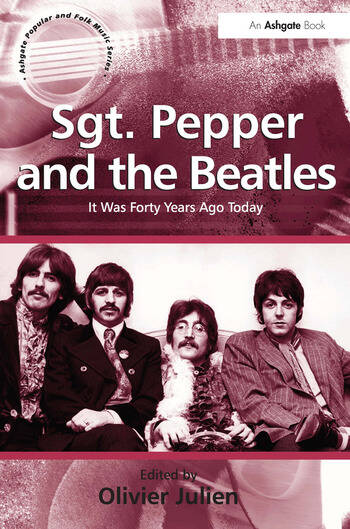 Sgt. Pepper and the Beatles: It Was Forty Years Ago Today

The first concept album in the history of popular music, the soundtrack of the Summer of Love or 'Hippy Symphony No. 1': Sgt. Pepper's Lonely Hearts Club Band is first and foremost the album that gave rise to 'hopes of progress in pop music' (The Times, 29 May 1967). Sgt. Pepper and the Beatles commemorates the fortieth anniversary of this masterpiece of British psychedelia by addressing issues that will help put the record in perspective. These issues include: reception by rock critics and musicians, the cover, lyrics, songwriting, formal unity, the influence of non-European music and art music, connections with psychedelia and, more generally, the sociocultural context of the 1960s, production, sound engineering and musicological significance. The contributors are world renowned for their work on the Beatles: they examine Sgt. Pepper from the angle of disciplines such as musicology, ethnomusicology, history, sociology, literature, social psychology and cultural theory.

Winner of the 2009 ARSC (Association for Recorded Sound Collections) Award for Excellence in Historical Recorded Sound Research: Best Research in Recorded Rock and Popular Music ’Like the album that it analyzes, this collection of essays by an international array of Beatles scholars has more than just a few hooks to capture everyone's particular fancy. The authors present a wide-ranging and contextualized discussion that shows us why Sgt. Pepper is a monument in the history of rock music. Given the richness of the Beatles' work and the densely dynamic times in which they flourished, all pivoting around Sgt. Pepper, this book is more than welcome.’ Deena Weinstein, DePaul University, USA ’The eleven chapters, written by distinguished international scholars, approach this groundbreaking album from eleven interrelated points of view: connections with psychedelia (psychedelic lyrics, sonic and conceptual realizations of the psychedelic experience), aesthetic unity and complexity (formal unity, aesthetic divergence of Lennon and McCartney, classical and psychedelic aesthetic ideals, influence of Indian music), production (sound design, position in the rise of a "phonographic tradition", album cover), critical reception and musicological significance. These diverse points of view cover the key issues, which made Sgt. Pepper not only the soundtrack of the "Summer of Love" but also the album of all times - an album which is remembered 40 years after its first release and will also be remembered in the future. This book is a "must" in the bookshelf of anybody interested in the Beatles or Sixties culture in general.’ YrjÃ¶ Heinonen, University of JyvÃ¤skylÃ¤, Finland ’... the continued writing of these leading academics is imperative to the growing body of work on the subject of popular music in general. The value of the format of essay collection is that not only does it bring us up to date with the work of these leading Beatles experts, but it presents it all

Sgt. Pepper and the Beatles: It Was Forty Years Ago Today