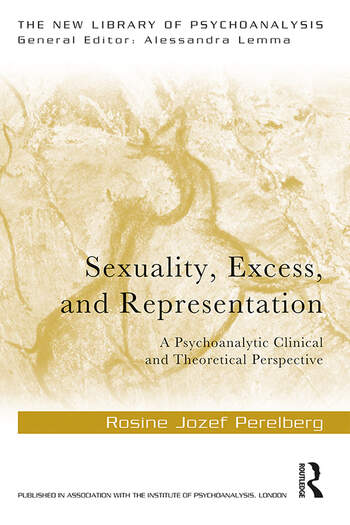 Sexuality, Excess, and Representation: A Psychoanalytic Clinical and Theoretical Perspective

Sexuality, Excess, and Representation develops a psychoanalytic understanding of psychic bisexuality and how it can be understood theoretically and in clinical practice.

Rosine Jozef Perelberg articulates a Freudian metapsychology with modern preoccupations with questions of sexual difference and differences. She expands on the ideas presented in her previous book edited work, Psychic Bisexuality: a British-French Dialogue. The author’s approach brings back into focus Freud‘s idea that "one is not born already made as a man or woman, but one is constituted as such in the process of development". Freud’s theoretical writing on bisexuality is examined, returning us firmly to infantile sexuality and the Oedipus complex and the "repudiation of femininity".

Perelberg draws on her past training as a social anthropologist to propose and explore the differentiation between sex, gender, and sexuality. She considers post-war academic work in gender and women’s studies and queer theory, arguing that the object of psychoanalysis is not gender but sexuality, which establishes a link between the sexual and the unconscious. She suggests that the unconscious permanently challenges our apparent unity as subjects.

will be of great interest to all practicing psychoanalysts and psychoanalytic psychotherapists.

Rosine Jozef Perelberg is President of the British Psychoanalytic Society, Visiting Professor in the Psychoanalysis Unit at University College London, and Corresponding Member of the Paris Psychoanalytical Society. Prior to embarking on psychoanalysis, she received a PhD in Social Anthropology from the London School of Economics. Her books include Psychoanalytic Understanding of Violence and Suicide, Female Experience: Four Generations of British Women Psychoanalysts on Work with Women (with Joan Raphael-Leff), Time and Memory, Dreaming and Thinking, The Greening of Psychoanalysis (with Gregorio Kohon) and Psychic Bisexuality: A British- French Dialogue. She is the author of Time, Space and Phantasy and Murdered Father, Dead Father: Revisiting the Oedipus Complex. She works in London in private practice.

"This superb psychoanalytic book evidences the rigour of Freudian metapsychology, its expression in contemporary clinical practice, and the theoretical developments that it inspires. The chapters attest to the implications of taking into account the movement of the drives, of love and hate, life and death: the sexual is always there, in its most archaic or elaborated forms. However, the negative is also present and active in the author’s elaborations. A profound knowledge of the Freudian oeuvre and a creative reading of his work are expressed in the depths of a remarkable clinical experience exposed by Perelberg in such a masterful and subtle way. There is no doubt: this is a psychoanalyst who is alive and vibrant – alive in the construction of her concepts and her method, anchored in the original foundations, and yet open to further contributions. The transference, this remarkable Freudian discovery, lends the author its force and meaning as she follows her internal paths of images and words." Catherine Chabert, Training analyst, French Psychoanalytical Association; Emeritus Professor, University Paris-Descartes

"This scholarly, impressively intelligent tour de force starts with a meticulous exposition of Freud’s insights on sexuality, offers clear and vivid syntheses of his clinical cases, and considers further theoretical developments. Perelberg examines in detail contemporary views on the sexual psyche, with contributions from her own recent work and that of other influential psychoanalysts. The book is enriched by her background in anthropology and her interest in culture through connections with literature, art, music, cinema." Ignês Sodré, Training and Supervising analyst, British Psychoanalytical Society

Sexuality, Excess, and Representation: A Psychoanalytic Clinical and Theoretical Perspective