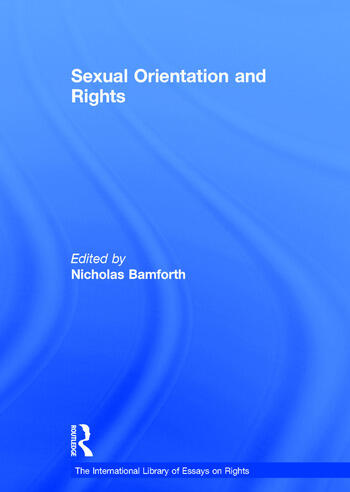 Debate about the rights of sexual minorities, whether individuals or members of same-sex couples, has become an important issue for legislatures and courts in many constitutional democracies. This volume collects together some of the more significant writings in the debate, and reflects a variety of perspectives: liberal, conservative, and radical. The topics covered include the meaning and importance of sexual freedom, gender roles, marriage and other significant partnerships, child care and adoption, the criminal law, employment, and expression and pornography. The volume also seeks to relate arguments about sexual orientation and rights to broader debates within feminist theory.

Nicholas Bamforth is Fellow in Law at The Queen's College, Oxford, and a university lecturer in Law at Oxford University. He is co-editor of Accountability in the Contemporary Constitution (2013) and co-author of Patriarchal Religion, Sexuality and Gender: A Critique of New Natural Law (2008) and Discrimination Law: Theory and Context (2008).