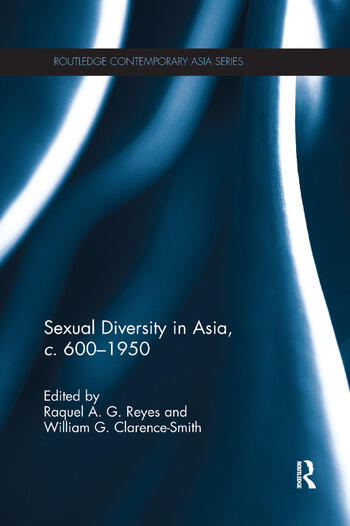 Non-reproductive sex practices in Asia have historically been a source of fascination, prurient or otherwise, for Westerners, who being either Catholic or Protestant, were often struck by what they perceived as the widespread promiscuity and licentiousness of native inhabitants. Graphic descriptions, and pious denunciations, of sodomy, bestiality, transvestitism, and incest, abound in Western travel narratives, missionary accounts, and ethnographies. But what constituted indigenous sexual morality, and how was this influenced by Hinduism, Buddhism, Confucianism, Islam, and Christianity over time and place? What sex practices were tolerated or even encouraged by society, community, and religious ritual, and what acts were considered undesirable, transgressive and worthy of punishment?

Sexual Diversity in Asia, c. 600-1950 is the first book to foreground same- sex acts and pleasure seeking in the histories of India, China, Japan, the Philippines, Thailand, and Indonesia. Drawing on a range of indigenous and foreign sources, the contributors, all renowned experts in their fields, shed light on indigenous notions of gender and the body, social hierarchies, fundamental ideas concerning morality and immorality, and episodes of seduction. The book illuminates - in striking case studies – attitudes toward non-procreative sex acts, and representations and experiences of same-sex pleasure seeking in the histories of Asia.

This path-breaking book is an important contribution to the study of gender and sexuality in Asian cultures and will also interest students and scholars of world history.

Raquel A. G. Reyes is a Research Fellow in the Department of History at the School of Oriental and African Studies, University of London, UK and at the Royal Netherlands Institute of South East Asian and Caribbean Studies (KITLV). Her research interests include history of medicine and science from transnational perspectives, overseas Chinese in Southeast Asia, and transregional trade networks and global exchanges.

William G. Clarence-Smith is Professor in the Department of History at the School of Oriental and African Studies, University of London, UK. He is the chief editor of the Journal of Global History and has written widely on diasporas, labour, sexuality and consumption.