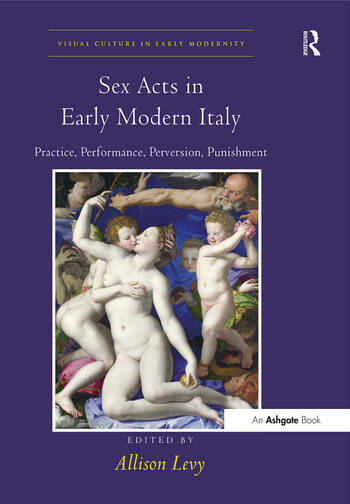 Emphasizing the peculiar, the perverse, the clandestine and the scandalous, this volume opens up a critical discourse on sexuality and visual culture in early modern Italy. Contributors consider not just painted (conventional) representations of sexual activities and eroticized bodies, but also images from print media, drawings, sculpted objects and painted ceramic jars. In this way, the volume presents an entirely new picture of Renaissance sexuality, stripping away layers of misconceptions and manipulations to reveal an often-misunderstood world. 'Sex acts' is interpreted broadly, from the acting out, or performing, of one's (or another's) sex to sexual activity, including what might be considered, now or then, peculiar practices and preferences and a variety of possibly scandalous scenarios. While the contributors come from a variety of disciplinary backgrounds, this collection foregrounds the visual culture of early modern sexuality, from representations of sex and sexualized bodies to material objects associated with sexual activities. The picture presented here nuances our understanding of Renaissance sexuality as well as our own.

Allison Levy is an art historian concerned with representations of the early modern body. She is author of Re-membering Masculinity in Early Modern Florence: Widowed Bodies, Mourning and Portraiture and editor of Widowhood and Visual Culture in Early Modern Europe.

'Princes and paupers; birds and melons; great art and lascivious sketches; love and lust - in this collection of pathbreaking essays all take on new meanings and spark adventuresome flights of discovery that suggest exciting new ways of rethinking Early Modern Italy. If anyone has any remaining doubts about the importance of sex for the history, literature, art, or simply the life of Early Modern Italy, this challenging, significant volume by a noteworthy group of scholars will lay those doubts to rest.' Guido Ruggiero, University of Miami, USA

'This excellent and wide-ranging collection of 16 essays provides an engaging survey of the many intersections of eroticism and the visual arts in early modern Italy, from priapic images on majolica pottery to satyrs’ heads on instruments of torture.' European History Quarterly

'... this is an impressive collection of articles that goes a long way to advance our understanding of early modern sex and sexuality.' Sixteenth Century Journal