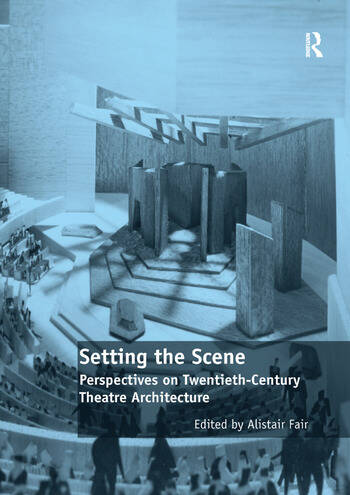 During the twentieth century, an increasingly diverse range of buildings and spaces was used for theatre. Theatre architecture was re-formed by new approaches to staging and performance, while theatre was often thought to have a reforming role in society. Innovation was accompanied by the revival and reinterpretation of older ideas. The contributors to this volume explore these ideas in a variety of contexts, from detailed discussions of key architects’ work (including Denys Lasdun, Peter Moro, Cedric Price and Heinrich Tessenow) to broader surveys of theatre in West Germany and Japan. Other contributions examine the MalmÃ¶ Stadsteater, ’ideal’ theatres in post-war North America, ’found space’ in 1960s New York, and Postmodernity in 1980s East Germany. Together these essays shed new light on this complex building type and also contribute to the wider architectural history of the twentieth century.

Dr Alistair Fair is a historian of twentieth-century architecture with a particular interest in public and institutional buildings. After studying at Oxford, the Courtauld Institute of Art, and Cambridge, he worked in architectural conservation before returning to Cambridge as a Research Associate and then a Leverhulme Trust Early Career Fellow. He joined the University of Edinburgh in autumn 2013 as a Chancellor’s Fellow. He has published widely on aspects of university, hospital and theatre architecture, including co-authorship with Alan Short and Peter Barrett of Geometry and Atmosphere: Theatre Buildings from Vision to Reality (Ashgate, 2011).

’This valuable collection on theatre architecture of the twentieth century discloses the tight practice of modernism within making, designing, and performing theatre. The volume beautifully fills an absence in the scholarship of modern theatre architecture with chapters that range from delightful recollections, deep research and original scholarship through historic overviews and focused studies of iconic and lesser-known theatres. Each succeeds in revealing how modernism became embedded within changing practices and theories of performance, detailing reciprocal relationships between designers, architects, directors, as well as political, social, and cultural bodies. The book describes, in great detail, struggles to build and perform in new forms of theatre that instil inventive, avant-garde practice within modern technology. In Japan, Germany, Sweden, London, and New York City, we become entangled and ensnared by the complex stories that make up each theatre, more so telling here, where performance and theatre are ultimately for and about storytelling.’ Marcia Feuerstein, Virginia Tech, USA ’Joe Papp, champion of free public theatre in New York, viewed theatre as an important poetic and political force�. By probing the relationship between theatre buildings, national culture and the civic realm, this collection shows how this was so, and convincingly demonstrates the enduring significance of theatre and the space of performance in the cinema and television age. Wide-ranging and thoughtful, this book offers fresh and stimulating perspectives on the links between architecture, community, actor and audience in the twentieth century.’ Louise Campbell, University of Warwick, UK