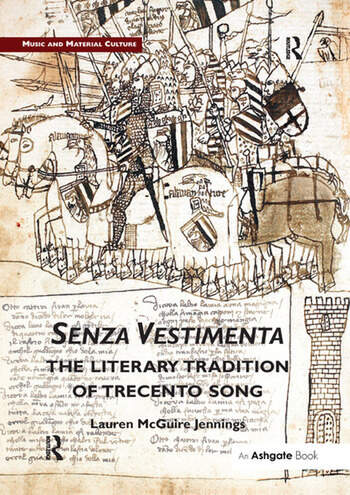 The metaphor of marriage often describes the relationship between poetry and music in both medieval and modern writing. While the troubadours stand out for their tendency to blur the distinction between speaking and singing, between poetry and song, a certain degree of semantic slippage extends into the realm of Italian literature through the use of genre names like canzone, sonetto, and ballata. Yet, paradoxically, scholars have traditionally identified a 'divorce' between music and poetry as the defining feature of early Italian lyric. Senza Vestimenta reintegrates poetic and musical traditions in late medieval Italy through a fresh evaluation of more than fifty literary sources transmitting Trecento song texts. These manuscripts have been long noted by musicologists, but until now they have been used to bolster rather than to debunk the notion that so-called 'poesia per musica' was relegated to the margins of poetic production. Jennings revises this view by exploring how scribes and readers interacted with song as a fundamentally interdisciplinary art form within a broad range of literary settings. Her study sheds light on the broader cultural world surrounding the reception of the Italian ars nova repertoire by uncovering new, diverse readers ranging from wealthy merchants to modest artisans.

Lauren McGuire Jennings specializes in the study of song, poetry, and manuscript culture in late medieval Italy as well as concert life in early nineteenth-century America. Currently a Lecturer in Music History at the University of North Carolina, Chapel Hill, she was, from 2012 to 2014, a Provost's Postdoctoral Scholar in the Humanities at the University of Southern California.

‘In Senza Vestimenta, Lauren Jennings turns the conventional understanding of medieval "poesia per musica" on its head, revealing that poems recognized by historians only for the music that adorns them in manuscript anthologies like the Squarcialupi Codex also led unsung lives of considerable significance - copied, collected, and contemplated as texts by generations of readers. Armed with formidable codicological expertise, a lively historical imagination, and a firm command of scholarship across a range of disciplines, Jennings constructs a new cultural anthropology of fourteenth-century Italian song and its material traces.’

‘Jennings’ book makes a valuable contribution to our understanding by showing how trecento song texts, often largely ignored by musicologists, were of literary merit, enjoyed an independent existence as poetry and were appreciated by different levels of society. … it is a thorough and excellently referenced text, with detailed analysis and well-chosen photographs of some manuscripts not reproduced elsewhere … I found much to interest me here, and personally enjoyed riding, on the vehicle of Jennings’ detailed research, through the vibrant cultural life of late medieval Florence.’

‘Lauren Jennings is to be congratulated for her excellent and conceptually well-founded study, which gives such solid and material proof of the literary value of the musical poetry of the Trecento. It is the fitting opening volume of the new Ashgate series, ‘Music and Material Culture’.