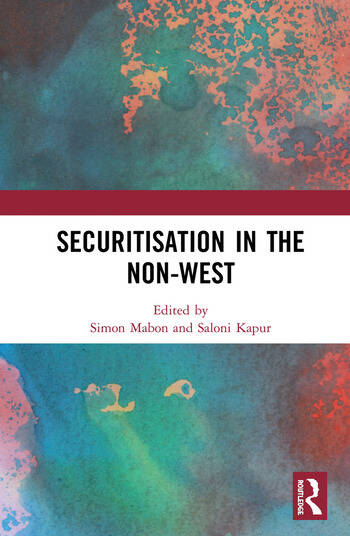 Securitisation in the Non-West

The concept of securitisation has gained increasing prominence in the past decade. Initially developed in Copenhagen, the term has been used to describe the broadening of the security agenda and the framing of particular issues as existential threats across the world. In spite of this prominence, very little work has been undertaken that questions the extent to which the concept can be applied beyond the Western world. This volume engages with these questions, providing a theoretical overview of issues with using the concept beyond the West, along with empirical papers looking at its use in a number of different contexts.

The chapters in this book were originally published as a special issue of Global Discourse.

1. ‘It’s not a Muslim ban!’ Indirect speech acts and the securitisation of Islam in the United States post-9/11 Clara Eroukhmanoff

6. From Copenhagen to Uri and across the Line of Control: India’s ‘surgical strikes’ as a case of securitisation in two acts Saloni Kapur

8 Securitization outside of the West: conceptualizing the securitization–neo-patrimonialism nexus in Africa Edwin Ezeokafor and Christian Kaunert

9. Securitization and the global politics of cybersecurity Mark Lacy and Daniel Prince

10. The politics of securitized technology Juha A. Vuori

12. China and discourses of desecuritization: a reply to Vuori Mark Lacy

13. Securitization, mafias and violence in Brazil and Mexico John Gledhill

Simon Mabon is a Senior Lecturer in International Relations at Lancaster University, UK, Director of the Richardson Institute, UK, and a Research Associate at the Foreign Policy Centre, UK. He is the author of Saudi Arabia and Iran: Soft Power Rivalry in the Middle East (2013), co-author of Hezbollah: From Islamic Resistance to Government (2015), The Origins of ISIS (2016), and co-editor of Terrorism and Political Violence (2015), amongst a number of other publications pertaining to Middle Eastern politics and International Relations.

Securitisation in the Non-West