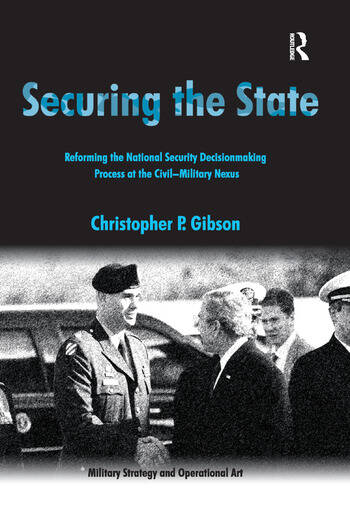 Securing the State: Reforming the National Security Decisionmaking Process at the Civil-Military Nexus

Focusing on top civilian and military advisors within the national security establishment, this significant book looks at four case studies with a focus on civil-military relations within the US Department of Defense. It investigates whether balanced approaches produce more effective policies and outcomes than dominating structures. The culmination of Gibson's treatise is the advancement of the 'Madisonian approach' to civilian control of the military, a normative framework designed to replace Samuel Huntington's 'Objective Control' model and also the 'Subjective Control' model, initially practised by Defense Secretary Robert McNamara and most recently by Defense Secretary Donald Rumsfeld. The Madisonian approach calls for changes in US law and new norms to guide the interactions of key participants who populate the civil-military nexus. This book is destined to influence US strategic thinking and should be added to the syllabus of courses in civil-military relations, strategic studies and military history. Given the struggling US policy in Iraq, the time is right for a critical review of US civil-military relations and this book provides the departure point for analysis and a potential way forward.

Christopher P. Gibson was former Assistant Professor of American Politics with the Department of Social Sciences at the United States Military Academy at West Point, and is currently Hoover National Security Fellow at Stanford University, USA.

'Gibson clearly leads the next generation of soldier-scholars within the Army Profession. In this deeply analytical book on the wide range of civil-military relations in America's past, Gibson offers solid reasons for a new structure of decision making that will better enable military advice to get to the right civilians in timely and consistent ways. His insights merit careful consideration and implementation by civilian and military leaders alike.' Don M Snider, US Military Academy, West Point, USA and Project Director and Co-Editor of The Future of the Army Profession (2005) '...an important book that deserves a wide readership among those concerned with military and national security affairs. Gibson's comprehensive and thoughtful examination of this subject represents a significant contribution to the often emotional debate over the respective roles of senior military officers and their civilian leaders...certain to spark debate, a debate that holds promise for helping civilian and military leaders analyze accurately threats to security, make informed decisions, and take appropriate measures to protect.' H.R. McMaster, International Institute for Strategic Studies, UK 'Col. Christopher Gibson is a scholar, professor, and combat officer who draws on that unique experience to offer a much needed revisionary analysis of the moral and practical responsibilities of today's military leaders. A sober, frank - and long overdue - discussion of democracy at war that pulls no punches in its quest for the truth.' Victor Davis Hanson,Stanford University, USA 'From inter-agency field operations to the national security decision making process itself, cooperation and collaboration is absolutely critical to success in today's operating environment. Using historical and contemporary examples, Gibson provides a penetrating and poignant examination of the complex relationship between our civilian and military leaders during times of conflict. Securing the State brings

Securing the State: Reforming the National Security Decisionmaking Process at the Civil-Military Nexus