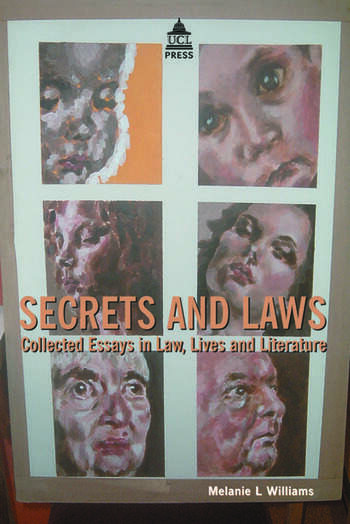 This book demonstrates that law can be newly interrogated when examined through the lens of literature.  The book creates simple pathways which energise and illustrate the links between legal theory and legal science and doctrine through the wider visions of history, literature and culture.  This broadening approach is integral to understanding law in the context of wider debates and media in the community.

The book provides a collection of essays, with additional commentary which reflects upon very recent scholarship and debate on a range of ethico-legal topics; it also illustrates how conventional legal matters may be rendered lively and palatable, as an adjunct to approaching doctrine and cases 'cold' in the conventional textbook manner.

The chapters range from examination of current thought on cohabitation and marriage laws (via Jude the Obscure), 19th century medico-legal cases relevant to current narratives of insanity in women and the nature and status of expert evidence generally; assisted suicide and autonomy (via a poem by Jon Stallworthy) to an essay on the nature of race and ethnicity (via a poem by R S Thomas), a discussion of obscenity and moral philosophy (via an essay on Crash by J G Ballard and the philosophy of Bernard Williams) and a history of ideas discussion of positivism, natural law and political crisis, war and terrorism through legal and political theory texts and a poem by Auden. The materials refer to case law where appropriate.

Melanie Williams, MA (Cantab), MA (Sussex), is the author of Empty Justice: One Hundred Years of Law, Literature and Philosophy, which received excellent reviews in several scholarly journals when published in 2002. She is Reader in Law at the University of Wales, Swansea.