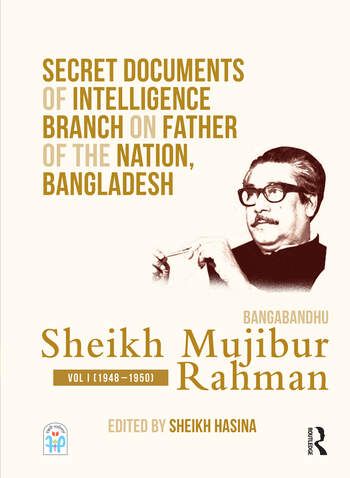 Secret Documents of Intelligence Branch on Father of the Nation, Bangladesh: Bangabandhu Sheikh Mujibur Rahman, is a 14-volume set of declassified documents edited by Sheikh Hasina, Honorable Prime Minister of Bangladesh. These are a compilation of the files maintained by the Intelligence Branch of Pakistan Government on Sheikh Mujibur Rahman, who emerged as the sole leader of the country and became Bangabandhu (Friend of Bangladesh). For his long-standing struggle and contribution in fostering notions of Bengali nationhood that led to the independence of Bangladesh, he has been honored as the Father of the Nation.

The volumes provide records for period 1948 to 1971 and chronologically elucidate the trajectory of the various movements and political struggles that led to the formation of an independent nation state called People's Republic of Bangladesh. These include the 1952 Bengali Language Movement that catalyzed the assertion of Bengali national identity in the region and became a forerunner to Bengali nationalist movements. Bangabandhu Sheikh Mujibur Rahman led the struggle for independence, first through massive populist and civil disobedience movements and later during the Bangladesh Liberation War. Important events cited in the present volumes include the 1954 United Front election victory, 1966 Six Point Movement, 1968 Agartala Conspiracy Case, 1969 mass uprising, 1970 election victory and 1971 Non-Cooperation Movement among others.

These are the first ever declassified documents released by the Government of Bangladesh and will serve as an invaluable historical resource in understanding the liberation of Bangladesh.

This first volume holds records for the period 1948-1950. Events included are as follows:

The Language Movement & the abolition of Zamindari System, the movement in Dacca University, the birth of Awami League, letters from Sheikh Mujibur Rahman, distribution of various leaflets, speeches-statements, arrest & imprisonment and meeting with various party leaders.