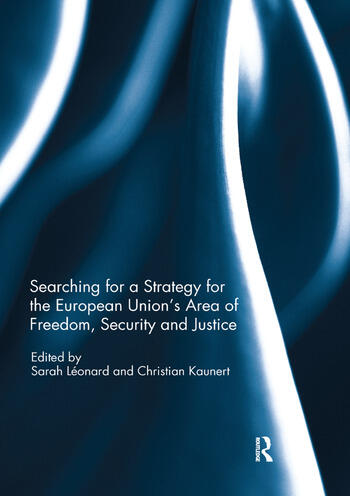 Searching for a Strategy for the European Union’s Area of Freedom, Security and Justice

This book examines the vision and strategy of the EU’s Area of Freedom, Security and Justice (AFSJ), which has become one of the key objectives of the European Union (EU). Recent events have also highlighted the saliency of several of the policy issues at the heart of the AFSJ. Amongst them, one can mention the terrorist attacks in 2015 in Paris and 2016 in Brussels and the ongoing refugee crisis in the Mediterranean region. At the same time, the end of the Stockholm programme, which provided the strategic framework for the development of the AFSJ between 2010 and 2014, has been followed by the adoption of new ‘strategic guidelines’, which can only be described as a short, vague and general document. It is therefore paradoxical that, at a time when AFSJ matters - such as asylum, migration, borders, terrorism, police and judicial cooperation – have never been so salient, the EU finds itself, for the first time ever, devoid of any significant, over-arching strategy for the development of its AFSJ. This book was published as a special issue of European Politics and Society.

Introduction
Beyond Stockholm: in search of a strategy for the European Union’s Area of Freedom, Security, and Justice
Sarah Léonard and Christian Kaunert

2. The development of the external dimension of the AFSJ – new challenges of the EU legal and policy framework
Maria O’Neill

3. The political-legal nexus in EU counter-terrorism: an assessment of the two-track influences between the EU and the UN
Bruno Oliveira Martins

4. Solidarity and sharing in the Common European Asylum System: the case of Syrian refugees
Eleni Karageorgiou

5. The EU as a Promoter of Preventive Criminal Justice and the Internal Security Context
Ester Herlin-Karnell

7. The effect of Frontex’s risk analysis on the European border controls
Satoko Horii

8. When (In)security travels: Europeanization and migration in Poland
Alexandra Schwell

Sarah Leonard is Senior Lecturer in Politics and Deputy Director of the European Institute for Security and Justice at the University of Dundee, Scotland, UK. She has recently co-edited Western Foreign Policy and the Middle East (2015) and Justice and Home Affairs Agencies in the European Union (2014).

is Professor of International Politics, Jean Monnet Chair in EU Justice and Home Affairs Policy and the Director of the European Institute for Security and Justice at the University of Dundee.

Searching for a Strategy for the European Union’s Area of Freedom, Security and Justice