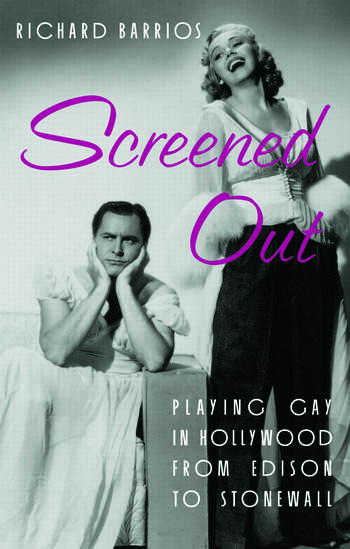 Screened Out: Playing Gay in Hollywood from Edison to Stonewall

Rapacious dykes, self-loathing closet cases, hustlers, ambiguous sophisticates, and sadomasochistic rich kids: most of what America thought it knew about gay people it learned at the movies. A fresh and revelatory look at sexuality in the Great Age of movie making, Screened Out shows how much gay and lesbian lives have shaped the Big Screen. Spanning popular American cinema from the 1900s until today, distinguished film historian Richard Barrios presents a rich, compulsively readable analysis of how Hollywood has used and depicted gays and the mixed signals it has given us: Marlene in a top hat, Cary Grant in a negligee, a pansy cowboy in The Dude Wrangler. Such iconoclastic images, Barrios argues, send powerful messages about tragedy and obsession, but also about freedom and compassion, even empowerment.

Mining studio records, scripts, drafts (including cut scenes), censor notes, reviews, and recollections of viewers, Barrios paints our fullest picture yet of how gays and lesbians were portrayed by the dream factory, warning that we shouldn't congratulate ourselves quite so much on the progress movies - and the real world -- have made since Stonewall.

Captivating, myth-breaking, and funny, Screened Out is for all film aficionados and for anyone who has sat in a dark movie theater and drawn strength and a sense of identity from what they saw on screen, no matter how fleeting or coded.

Richard Barrios, a native of Louisiana, lives in New York City. He is the author of A Song in the Dark: The Birth of the Musical Film. He holds degrees in cinema studies, music history, and literature, and has worked in the film industry and music publishing.

"A finely nuanced analysis of how gays and lesbians were presented on screen from the 1920s through the 1970s." -- G.M. Kramer, Lambda Book Report
"Richard Barrios has turned his amused, intelligent eye to the depiction of gay men and lesbians in pre-Stonewall Hollywood films...Barrios has compiled hundreds of queer cinematic examples, from the little-known Algie, the Miner (1912) to the iconic The Boys in the Band (1970). His comments are shrewd and his coverage complete. Following up on Vito Russo's The Celluloid Closet, Screened Out reminds us that 'film has continued to hold up its strange mirror-alternately reflecting, repressing, ridiculing, suggesting, condemning, questioning, and even, on occasion, accepting'"." -- Reed Woodhouse, outFront Books
"Building on the legacy of The Celluloid Closet , Barrios manages to be both encyclopedic and breezy; taking the reader on a comfortable and well documented tour of 20th century American screen images of homosexuality. Screened Out is a must-have for film buffs and queer buffs and will be the standard reference work and source for all future work in this area." -- Esther Newton, author of Margaret Mead Made Me Gay
"...a comprehensive and lucidly written contribution to the history of queer images in Hollywood films, rich in sharp analysis and fresh perspectives. It is also a must-read for anyone trying to make sense of the cultural climate leading up to the Stonewall riots, which ushered in the modern gay rights movement. An important book and a terrific resource." -- Michelangelo Signorile, author of Queen in America
"Exhaustive and well-researched, as well as a compulsively fun read." -- Marrit Ingman, The Austin Chronicle
"Along the way, [Barrios] introduces some wonderfully oddball films that will be heating up my VCR." -- Steve Weinstein, New York Blade News
"Barrios's work here is invaluable, and more necessary than ever before...By giving this history of queer images in mainstream American culture, Barrios has illuminated the present as well as the past." -- Michael Bronski, ThePhoenix.com

Screened Out: Playing Gay in Hollywood from Edison to Stonewall