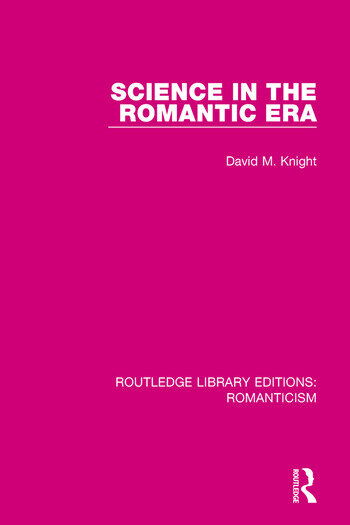 Science in the Romantic Era

First published in 1998. The Romantic Era was a time when society, religion and other beliefs, and science were all in flux. The idea that the universe was a great clock, and that men were little clocks, all built by a divine watchmaker, was giving way to a more dynamic and pantheistic way of thinking. A new language was invented for chemistry, replacing metaphor with algebra; and scientific illustration came to play the role of a visual language, deeply involved with theory. A scientific community came gradually into being as the 19th century wore on. The papers which compose this book have appeared in a wide range of books and journals; together with the new introduction they illuminate science and its context in the Romantic Era and follow its effects in the 19th century.

Foreword;  Acknowledgements;  Part One: What is History of Science;  1. The History of Science in Britain: A Personal View  2. Background and Foreground: Getting Things in Context;  Part Two: Romantic Science;  3. The Scientist as Sage  4. Romanticism and the Sciences  5. Steps Towards a Dynamical Chemistry  6. The Physical Science and the Romantic Movement  7. Chemistry, Physiology and Materialism in the Romantic Period  8. "Conquering the Prejudice Adopted From the French School of Chemistry": the Science in Britain in Gay-Lussac’s Time;  Part Three: Organization and Utility;  9. Science and Professionalism in England, 1770-1830  10. Agriculture and Chemistry in Britain around 1800  11. Tyrannies of Distance in British Science  12. The Application of Enlightened Philosophy: Banks and the Physical Sciences;  Part Four: Pictures, Diagrams and Symbols;  13. A Note on Sumptuous Natural Histories  14. Scientific Theory and Visual Language  15. William Swainson: Types, Circles and Infinities  16. William Swainson: Naturalist, Author and Illustrator  17. Ordering the World;  18. Pictures, Diagrams and Symbols: Visual Language in Nineteenth-Century Chemistry;  Part Five: Scientific Language;  19. Accomplishment or Dogma: Chemistry in the Introductory Works of Jane Marcet and Samuel Parkes  20. Lavoisier; Discovery, Interpretation and Revolution  21. Words that Make Worlds  22. From Science to Wisdom: Humphry Davy’s Life  23. Getting Science Across;  Part Six: Epilogue;  24. Science and Culture in Mid-Victorian Britain: The Reviews and William Crookes’ Quarterly Journal of Science  25. Observation, Experiment, Theory – and the Spirits  26. Arthur James Balfour (1848-1930): Scientism and Scepticism;  Index

Multivolume collection by leading authors in the field

Science in the Romantic Era