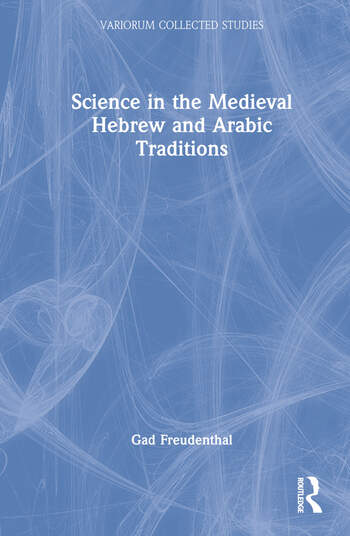 Science in the Medieval Hebrew and Arabic Traditions

Two major themes run through these studies by Gad Freudenthal: science and philosophy in the medieval Hebrew tradition; and the repercussions of Greek theories of matter in the medieval Arabic and Hebrew scientific traditions. The opening essays offer a sociologically-informed picture of the acceptance or rejection of the sciences among medieval Jews in Southern France. This is followed by studies of individual figures: on Gersonides' thought; on Maimonides' and Gersonides' respective views of astrology; on al-FÃ¢rÃ¢bÃ®'s philosophy of geometry; and two notes (translated from Hebrew) on less well-known thinkers. The second part of the volume is thematic; a study identifying in Anaximander's theory of matter the fountainhead of a long-lasting scientific problématique is followed by five essays on its reverberations in the works of authors as different as Saadia Gaon, Avicenna, Averroes, Shem-Tov Ibn Falaqera and the author of the mystic Sefer ha-maskil. They all sought and gave accounts for the unity and persistence of the cosmos, in which metaphysics often complements physics, some echoing Stoic physics, a topic to which special attention is devoted.

Gad Freudenthal is Director of Research at the CNRS, Paris, France.

'... this collection is a very impressive piece of learning; and I recommend it to all readers of Aestimatio interested in the history of science in general, and the study of different scientific themes in Medieval Arabic and Jewish sciences in particular.' Aestimatio

Science in the Medieval Hebrew and Arabic Traditions