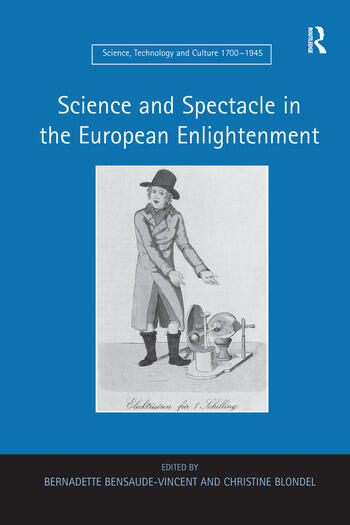 Science and Spectacle in the European Enlightenment

Air-pumps, electrical machines, colliding ivory balls, coloured sparks, mechanical planetariums, magic mirrors, hot-air balloons - these are just a sample of the devices displayed in public demonstrations of science in the eighteenth century. Public and private demonstrations of natural philosophy in Europe then differed vastly from today's unadorned and anonymous laboratory experiments. Science was cultivated for a variety of purposes in many different places; scientific instruments were built and used for investigative and didactic experiments as well as for entertainment and popular shows. Between the culture of curiosities which characterized the seventeenth century and the distinction between academic and popular science that gradually emerged in the nineteenth, the eighteenth century was a period when scientific activities took place in a variety of sites, ranging from academies, and learned societies to salons and popular fairs, shops and streets. This collection of case studies describing public demonstrations in Britain, Germany, Italy and France exemplifies the wide variety of settings for scientific activities in the European Enlightenment. Filled with sparks and smells, the essays raise broader issues about the ways in which modern science established its legitimacy and social acceptability. They point to two major features of the cultures of science in the eighteenth-century: entertainment and utility. Experimental demonstrations were attended by apothecaries and craftsmen for vocational purposes. At the same time, they had to fit in with the taste of both polite society and market culture. Public demonstrations were a favourite entertainment for ladies and gentlemen and a profitable activity for instrument makers and booksellers.

Bernadette Bensaude-Vincent is Professor of History and Philosophy of Science at the Université Paris-X Nanterre, France. Christine Blondel is Researcher at CNRS, Paris, France

’A valuable addition to research libraries. Highly recommended.’ Choice ’This exceptionally coherent volume should appeal to historians of science and of enlightenment more broadly.’ English Historical Review ’We can be grateful to Ashgate for its steady production of volumes [...] in the history of eighteenth-century science, including this wide-ranging collection that illuminates a significant aspect of Enlightenment experimental science.’ New Perspectives on the Eighteenth Century

Science and Spectacle in the European Enlightenment