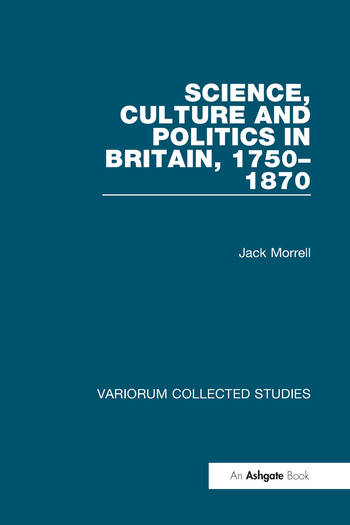 From the late 1960s, Jack Morrell’s articles have stimulated a reorientation of the historiography of science. He showed by example, in the studies now gathered here, how the social, political, economic, and institutional aspects of science could be integrated with its content. In his writings he assumed that science was a socially organised attempt to set and solve problems concerning the natural world, and that historians should take cognisance of everything which affected that activity - without down-grading published knowledge, its end-product. Specific topics in this volume include the institutions of British science, especially universities, laboratories, and research schools, the careers of the scientists, and the impact of science in the north of England and, especially, in Scotland.

Contents: Reflections on the history of Scottish science; The Edinburgh Town Council and its university, 1717-1766; The University of Edinburgh in the late 18th century: its scientific eminence and academic structure; Professors Robison and Playfair, and the Theophobia Gallica: natural philosophy, religion and politics in Edinburgh, 1789-1815; The Leslie affair: careers, Kirk and politics in Edinburgh in 1805; Thomas Thomson: professor of chemistry and university reformer; Science and Scottish university reform: Edinburgh in 1826; The chemist breeders: the research schools of Liebig and Thomas Thomson; Practical chemistry in the University of Edinburgh, 1799-1843; The patronage of mid-Victorian science in the University of Edinburgh; Individualism and the structure of British science in 1830; London institutions and Lyell’s career: 1820-41; Brewster and the early British Association for the Advancement of Science; Economic and ornamental geology: the Geological and Polytechnic Society of the West Riding of Yorkshire, 1837-53; Wissenschaft in Worstedopolis: public science in Bradford, 1800-1850; Index.

'Morrell challenges the view that no work in the social history of science before 1980 is now worth reading. With three exceptions, all the papers presented here pre-date 1980 and constitute a formidable reproach to that view. Each played its part in steering the history of science towards the best historical practices and in each we find the clarion call that science must be studied as a social activity, not just as published knowledge.' Ambix ’ ...this collection illustrates a central figure’s breadth of scholarship and methodological consistency over time. Important areas of the social history of science were prefigured in papers collected here; they are still valuable and are at the heart of central issues in the history of science.’ British Journal for the History of Science, vol. 33 '... a valuable addition... it is always refreshing to re-read work of such quality and enduring inventiveness.' Social History of Medicine