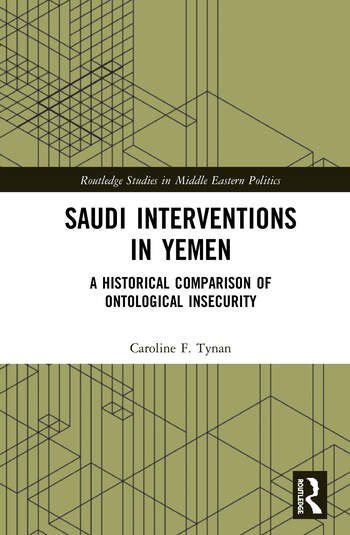 Saudi Interventions in Yemen: A Historical Comparison of Ontological Insecurity

This book explains the Saudi decision to launch a direct military intervention in Yemen in 2015 by comparing it with the monarchy’s response to Egyptian intervention into Yemen in 1962. It does so through the lens of domestic politics by tracing the monarchy’s response to the opposition in both time periods, and how this was informed by the different regional contexts of the 1960s and the 2011 Arab Spring.

The study argues that Saudi Arabia enhanced its own institutions, including a pan-Islamic ideological justification to rule, in response to aggression from Egypt and its revolutionary pan-Arab ideology. This contributed to a relatively cautious Saudi foreign policy in response to regional threats from Arab nationalism, along with a strategy of co-optation within the kingdom. In contrast, the non-ideological threat embodied in the Arab Spring posed a more existential threat to Saudi legitimacy. The new crown prince manipulated the regime’s sense of anxiety from this to consolidate power through further scapegoating of the Shi’a minority, exacerbated tensions with foreign rivals, and, most blatantly, the 2015 intervention in Yemen.

Comparing Saudi foreign policy changes from the Arab nationalist period to the post-Arab Spring period, this volume is a valuable resource for scholars and students interested in political science, history, international relations and Middle East politics.

4. From co-optation to aggressive legitimation: the evolution of Saudi regime survival strategies since 2011

5. Constructing legitimacy through external threat: the 2015 intervention in Yemen

Caroline Tynan is currently an ACLS/Mellon postdoctoral research fellow at the Committee to Protect Journalists in New York, where she works to identify long-term trends in legal, discursive, and physical threats to journalists around the world. Her research interests include MENA politics, authoritarianism, critical security studies, and regime transitions.

Saudi Interventions in Yemen: A Historical Comparison of Ontological Insecurity