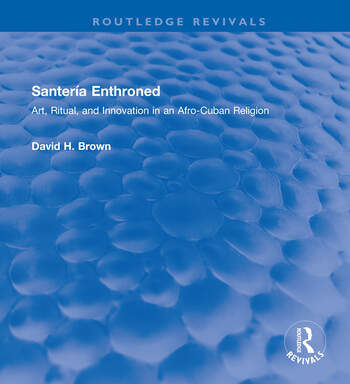 Santería Enthroned: Art, Ritual, and Innovation in an Afro-Cuban Religion

Ever since its emergence in colonial-era Cuba, Afro-Cuban Santería (or Lucumí) has displayed a complex dynamic of continuity and change in its institutions, rituals, and iconography. Originally published in 2003 Santería Enthroned combines art, history, cultural anthropology, and ethnohistory to show how Africans and their descendants have developed novel forms of religious practice in the face of relentless oppression. Focusing on the royal throne as a potent metaphor in Santería belief and practice it shows how negotiations among ideologically competing interests have shaped the religion’s symbols, rituals, and institutions from the nineteenth century to the present. Rich case studies of change in Cuba and the United States, including a New Jersey temple and South Carolina’s Oyotunji Village, reveal patterns of innovation similar to those found among rival Yoruba kingdoms in Nigeria. Throughout, the book argues for a theoretical perspective on culture as a field of potential strategies and "usuable pasts" that actors draw upon to craft new forms and identities – a perspective that will be invaluable to all students of the African Diaspora.

Part I: Institutional and Ritual Innovation

2. From Cabildo de Nacíon to Casa-Templo: The New Lucumí, Institutional Reform, and the Shifting Location of Cultural Authenticity

3. Myths of the Yoruba Past and Innovations of the Lucumí Present: The Narrative Production of Cosmology, Authority, and Ritual Variation

5. "The Palace of the Obá Lucumí" and the "Creole Taste": Innovations in Iconography and Meaning

Appendix 2: Irene Wright’s Description of Her Visit to "African Cabildo" in El Cerro, 1910

Santería Enthroned: Art, Ritual, and Innovation in an Afro-Cuban Religion