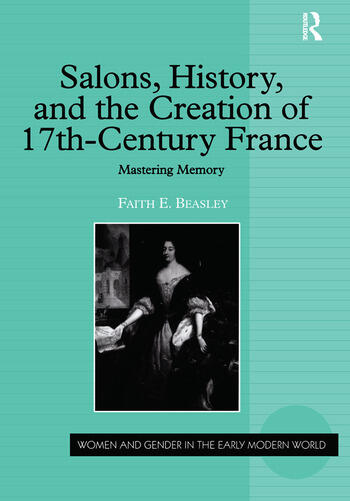 Salons, History, and the Creation of Seventeenth-Century France: Mastering Memory

The first half of the book is a detailed study of how the salons influenced the development of literature. Beasley argues that many women were not only writers, they also served as critics for the literary sphere as a whole. In the second half of the book Beasley examines how historians and literary critics subsequently portrayed the seventeenth century literary realm, which became identified with the great reign of Louis XIV and designated the official canon of French literature. Beasley argues that in a rewriting of this past, the salons were reconfigured in order to advance an alternative view of this premier moment of French culture and of the literary masterpieces that developed out of it. Through her analysis of how the seventeenth century salon has been defined and transmitted to posterity, Beasley illuminates facets of France's collective memory, and the powers that constituted it in the past and that are still working to define it today.

Contents: A note on translations; Introduction; The voices of shadows: the salons and literary taste; Defining a literary culture: the Ruelles and literary innovation; From critics to hostesses: creating classical France; Disseminating a national past: teaching Le Grand Siècle; Afterword; Bibliography; Index.

Faith E. Beasley is professor of French at Dartmouth College, USA. She is the author of Revising Memory: Women's Fictions and Memoirs in Seventeenth-Century France. She is also the co-editor, with Katherine Ann Jensen, of Approaches to Teaching Lafayette's 'The Princess of Clèves'.

'In this elegant and lucid book, Faith E. Beasley presents a feminist revision of the Mythe du Grand Siècle, focusing on the influential salon culture led by women. Negotiating four centuries of history, Beasley retraces all the steps of the fascinating history of the appropriation and obfuscation of that rich female culture at the hands of the royal academies first, and of literary historians from 1670 to the 20th century. This is, I believe, one of the most thorough accounts of the ideological battle for the appropriation of France's national culture.' Elena Russo, Professor of French Literature, Johns Hopkins University '...makes a truly foundational contribution to reorienting and redefining the field of seventeenth-century literary studies ... at once extending and correcting others' work on the construction of memory, [Beasley] traces the post-Revolutionary refashioning of the literary and pedagogical canon as exclusively masculine in the interests of nation-building. The book reveals a world of salons that was even more important that we had known and will inspire future work to reclaim that world in all its richness and complexity.' Carolyn Lougee Chappell, Frances and Charles Field Professor in History, Stanford University 'The goal of this exceptional book is nothing less than to challenge the way people read the 17th century and the works that represent it... Through a series of close readings of authors rarely studied [...] she breaks away from the traditional view... With feminine influence restored, the 17th-century literary scene opens to new and provocative interpretations... Highly recommended.’ Choice 'As a whole, Beasley's study is timely and convincing and will be of interest to scholars of women's literary history as well as those who specialize in the literature of Le Grand Siècle.' Renaissance Quarterly '... an ambitious and passionate book... fascinating insights into contemporary French culture... Beasley's account of women's sevent

Salons, History, and the Creation of Seventeenth-Century France: Mastering Memory