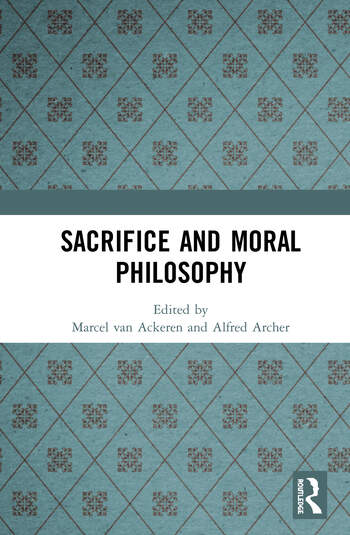 The aim of this book is to foster a more explicit and direct discussion of the concept of sacrifice and its importance in moral philosophy.

The chapters in this book were originally published as a special issue of the International Journal of Philosophical Studies.

1. On the Moral Significance of Sacrifice

2. How Morality Becomes Demanding Cost vs. Difficulty and Restriction

6. The Value of Sacrifices

8. Demandingness and Boundaries Between Persons

9. Rehabilitating Self-Sacrifice: Care Ethics and the Politics of Resistance

Marcel van Ackeren is an External Investigator at Freiburg’s Centre for Integrative Biological Signalling Studies, a Research Associate at Oxford’s Uehiro Centre for Practical Ethics and an Associate Member of the Faculty of Philosophy in Oxford, UK. He has held visiting positions at Cambridge, Berne and Milan, was Fellow at the Institute for Advanced Studies (Wissenschaftskolleg) in Greifswald and was Fellow and Researcher at the Institute for Advanced Studies in Bioethics at Münster University, Germany. He works in ethics, especially demandingness, history of philosophy, especially ancient and Kantian philosophy and methodology/metaphilosophy