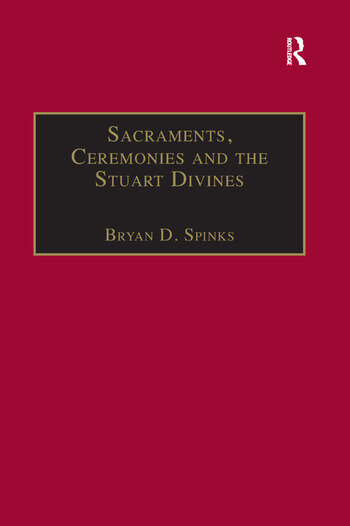 Sacraments, Ceremonies and the Stuart Divines: Sacramental Theology and Liturgy in England and Scotland 1603-1662

This book surveys developments in sacramental and liturgical discourse and discord, exploring the writings of English and Scottish divines, and focusing on baptism and the Lord's Supper. The reigns of James I and Charles I coincided with divergence and development in teaching on the sacraments in England and Scotland and with growing discord on liturgical texts and the ceremonial. Uniquely focusing on both nations in a single study, Bryan Spinks draws on theological treatises, sermons, catechisms, liturgical texts and writings by Scottish theologians hitherto neglected. Exploring the European roots of the churches of England and Scotland and how they became entwined in developments culminating in the Solemn League and Covenant and Westminster Directory, this book presents an authoritative study of sacramental and liturgical debate, developments, and experiments during the Stuart period.

Contents: Introduction; The sacramental legacy of the 16th-century Reformation; Lex Ritualis, Lex Credendi? From Hampton Court to the Five Articles of Perth; The development of conformist Calvinist and patristic reformed 'sacramentalism', and the sacramental rites of the 1637 Scottish Book of Common Prayer; From the Long Parliament to the death of Cromwell; Kingdoms and churches apart: the Restoration; After-thoughts; Appendices; Bibliography; Index.

’There is no comparable study which provides such a synoptic account of liturgical development and discord in Scotland and England in the seventeenth century. With that deftness which comes only from detailed knowledge of the source material, Bryan Spinks brings fresh and compelling readings of many hitherto neglected documents. This is an invaluable book.’ Professor Iain Torrance, Head of the Department of Divinity and Religious Studies, University of Aberdeen, Scotland 'In this remarkable book...he fills a significant gap in our knowledge and understanding of English and Scottish sacramental theology through the turbulant Stuart era... achieves a number of significant ends...deserves to be read by anyone interested in rediscovering our common roots... Many will benefit from the insights of this book, particularly Evangelicals, who would find in the sacramental controversies of this era some significant precedents... It is a scandal that an historical theologian of Spinks's calibre should be lost to British academe.' Church Times 'This is an erudite and impressively researched book, drawing on often neglected seventeenth-century churchmen and theologians. As a national synoptic study of sacramental theology it is peerless, and will undoubtedly become a key work for theologicans of the period.' H-Net Reviews 'By any counts it is an ambitious venture, but [Spinks'] skills as an historical theologian at home with both doctrine and liturgy place him in an admirable position for this important task. The resulting book is a lively, if at times technical, read... All in all, Spinks has written a significant ecumenical study of the sacraments. It is hoped that Anglican evangelicals will take the chance to delve into their own past, and perhaps see some contemporary debates in a wider context.' Journal of Theological Studies 'Bryan Spinks' study is to be welcomed, providing as it does a guide through this critical period in the development of sacramental theolog

Sacraments, Ceremonies and the Stuart Divines: Sacramental Theology and Liturgy in England and Scotland 1603-1662