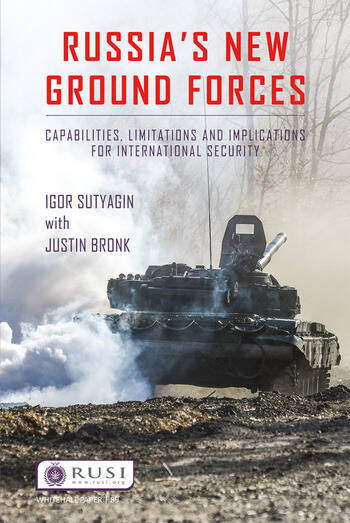 This Whitehall Paper provides an in-depth analysis of Russia’s Ground Forces, including airborne and naval troops. It examines their role in Russian foreign policy, reforms to units’ equipment and operational roles, performance during combat operations against Ukraine, and current unit deployment locations and purposes in the Central, Southern and Western Military Districts.

Russia perceives itself as operating from a position of weakness and surrounded by superior NATO forces. It is pursuing a programme of military reform, both in terms of equipment and structures. The Russian Ground Forces are being geared towards fighting in aggressive, short, sharp and complex operations into enemy territory, as well as being streamlined to increase readiness levels and deployability at short notice.

However, operations against Ukraine have required force generation efforts from almost every Russian Ground Forces formation, including those in the Far East, which is evidence that the Kremlin’s ability to sustain even a moderate tempo of operations in the medium term is limited. Furthermore, chronic undermanning and morale issues remain, which will be exacerbated by the political decision to re-establish division-scale formations. In addition, Western sanctions and Russia’s difficult economic situation are severely hampering efforts to extend equipment reforms across the whole force.

Russian Ground Forces should not be seen by the West as an unstoppable colossus. However, the West must not ignore the unmistakable Russian efforts to prepare for offensive, high-tempo operations against NATO, and the formidable political will that will use them if given the opportunity.

1. Military Force as a Tool of Russian Foreign Policy

Appendix I. Estimate of the Strength of Russian Ground Troops

Appendix II. Estimate of the Strength of Russian Land Forces in 2014

Igor Sutyagin is Senior Research Fellow for Russian studies at RUSI. His research is concerned with US–Russian relations, strategic armaments developments and broader nuclear arms control, anti-ballistic missile defense systems. He has authored more than 100 articles and booklets published in the Soviet Union/Russia, the US, UK, Germany and Switzerland. He is also the co-author of the book Russian Strategic Nuclear Weapons.

Justin Bronk is the Research Fellow for airpower and military technology at RUSI. Alongside a primary focus on airpower, his research also includes weapons system and munitions analysis in conflict zones, in particular Ukraine and Syria. Justin is also Editor of RUSI Defence Systems.