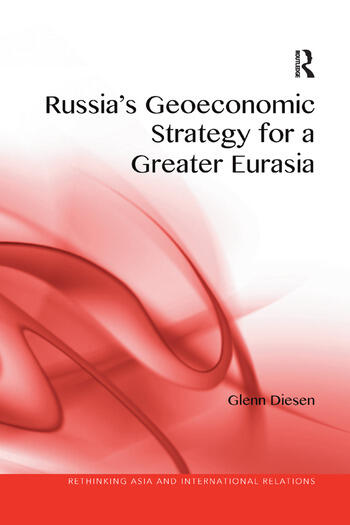 Moscow has progressively replaced geopolitics with geoeconomics as power is recognised to derive from the state’s ability to establish a privileged position in strategic markets and transportation corridors. The objective is to bridge the vast Eurasian continent to reposition Russia from the periphery of Europe and Asia to the centre of a new constellation. Moscow’s ‘Greater Europe’ ambition of the previous decades produced a failed Western-centric foreign policy culminating in excessive dependence on the West. Instead of constructing Gorbachev’s ‘Common European Home’, the ‘leaning-to-one-side’ approach deprived Russia of the market value and leverage needed to negotiate a more favourable and inclusive Europe. Eurasian integration offers Russia the opportunity to address this ‘overreliance’ on the West by using the Russia’s position as a Eurasian state to advance its influence in Europe.

Offering an account steeped in Russian economic statecraft and power politics, this book offers a rare glimpse into the dominant narratives of Russian strategic culture. It explains how the country’s outlook adjusts to the ongoing realignment towards Asia while engaging in a parallel assessment of Russia’s interactions with other significant actors. The author offers discussion both on Russian responses and adaptations to the current power transition and the ways in which the economic initiatives promoted by Moscow in its project for a ‘Greater Eurasia’ reflect the entrepreneurial foreign policy strategy of the country.

2. The Rise, Decline and Potential Revival of US Geoeconomic Power

4. Russian Geoeconomics in a Greater Eurasia

6. Russia and China: Convergence of the Eurasian Core

9. Europe at the Periphery of ‘Greater Eurasia’

Dr Glenn Diesen is an Adjunct Research Fellow at Western Sydney University and an affiliate at the Higher School of Economics, Moscow. Dr Diesen specialises in Russia’s approach to European and Eurasian integration, and the dynamics between the two. This includes central topics such as ideology, energy and geoeconomics. He is the author of EU and NATO Relations with Russia, Routledge 2015.