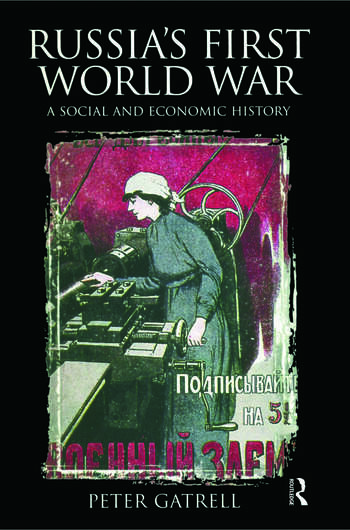 The story of Russia’s First World War remains largely unknown, neglected by historians who have been more interested in the grand drama that unfolded in 1917. In Russia’s First World War: A Social and Economic History Peter Gatrell shows that war is itself ‘revolutionary’ – rupturing established social and economic ties, but also creating new social and economic relationships, affiliations, practices and opportunities.

Russia’s First World War brings together the findings of Russian and non-Russian historians, and draws upon fresh research. It turns the spotlight on what Churchill called the ‘unknown war’, providing an authoritative account that finally does justice to the impact of war on Russia’s home front

2.     ‘Educated society' and the Russian elite

3.    Narod: plebeian society during the war

8.    Economic nationalism and the mobilisation of ethnicity in the 'great patriotic war'

9.    Hierarchy subverted: the February Revolution and the Provisional Government

is Professor of Economic History at the University of Manchester. He has written extensively on Russia, including (with Nick Baron) Homelands: W ar , Population and Statehood in Eastern Europe and Russia , 1918-1924 (2004) and the prize-winning book, A Whole Empire Walking: Refugees in Russia during World W ar I (1999).