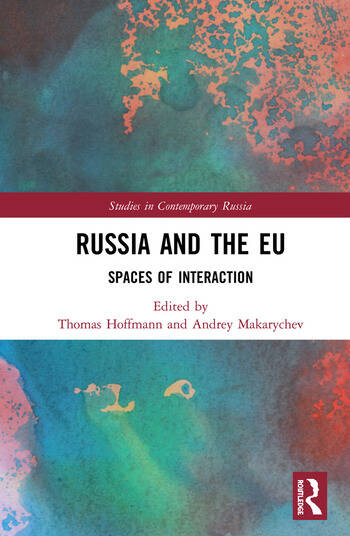 Russia and the EU: Spaces of Interaction

The annexation of Crimea in 2014 and Russia’s support for military insurgency in eastern Ukraine undermined two decades of cooperation between Russia and the EU leaving both sides in a situation of reciprocal economic sanctions and political alienation. What is left of previous positive experiences and mutually beneficial interactions between the two parties? And, what new communication practices and strategies might Russia and Europe use?

Previously coherent and institutionalized spaces of communication and dialogue between Moscow and Brussels have fragmented into relations that, while certainly not cooperative, are also not necessarily adversarial. Exploring these spaces, contributors consider how this indeterminacy makes cooperation problematic, though not impossible, and examine the shrunken, yet still existent, expanse of interaction between Russia and the EU. Analysing to what extent Russian foreign policy philosophy is compatible with European ideas of democracy, and whether Russia might pragmatically profit from the liberal democratic order, the volume also focuses on the practical implementation of these discourses and conceptualizations as policy instruments.

This book is an important resource for researchers in Russian and Soviet Politics, Eastern European Politics and the policy, politics and expansion of the European Union.

The EU and Russia: space of interaction in times of crisis: an introduction

Part I Cultures and philosophies

6. The political discourse of the Kremlin in Spain: channels, messages, and interpretive frameworks

7. Russia’s strategy of influence in Europe: a French case study

8. Russian threat as a push factor in the European integration discourse in Poland

9. The European Union and Russia in the contested South Caucasus: how to move forward

Part III Legal norms and practices beyond the (EU)rope

10. Defending its rights or testing the limits? Trade relations and disputes between Russia and the EU before and after the Ukraine crisis

11. Who may sail the Arctic? Russia’s and the EU’s perspectives on the legal status of the Northern sea route

12. The institution of citizenship and practices of passportization in Russia’s European neighbourhood policies

How to study and teach anew EU– Russia relations: a methodological conclusion in seven points

Andrey Makarychev is Guest Professor at the Johan Skytte Institute of Political Science, University of Tartu.

Russia and the EU: Spaces of Interaction