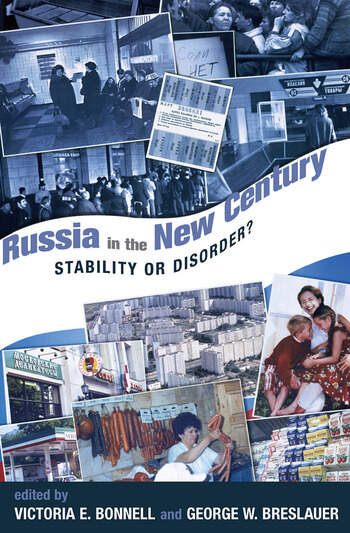 Russia In The New Century: Stability Or Disorder?

What has happened to Russia since the collapse of communism in 1991 and where is the country going in the new century? Russia has escaped widespread social disorder or political collapse, but few observers would argue that the situation has stabilized. Seventeen distinguished scholars from the United States, Russia, and Europe analyze the institutions, social forces, and ideas that are transforming Russia and are, in turn, being transformed in Russia today. The first multidisciplinary assessment of the Yeltsin era, Russia in the New Century: Stability or Disorder? focuses on superpresidentialism, the Constitutional Court, the military, the virtual economy, the network society, organized crime, the new entrepreneurs, workers, survival networks, Russian political parties and nationalism, and the crisis in Dagestan. Thirteen essays and the editors' introduction offer new perspectives on Russia's prospects for stability and disorder in the twenty-first century.

Russia In The New Century: Stability Or Disorder?