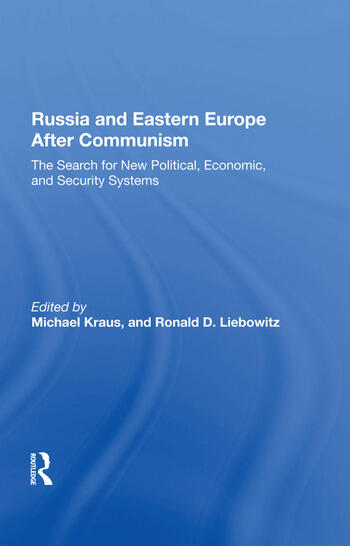 Russia And Eastern Europe After Communism: The Search For New Political, Economic, And Security Systems

The conference on "Russia and East Europe in Transition," held at Middlebury College in May 1994 under the auspices of the Center for Russian and East European Studies, provided the impetus for this volume. The two-day gathering was made possible by a Title VI grant from the U.S. Department of Education and the Jessica Swift Endowed Lecture Fund of Middlebury College, for which we are most grateful. Apart from the contributors to this volume, the conference participants included: George Bellerose, Raymond E. Benson, Valery Chalidze, Michael Claudon, David Colander, Guntram H. Herb, Lars Lib, Tamar Mayer, Noah M.J. Pickus, Sunder Ramaswamy, David A. Rosenberg, and Mitchell Smith. Acting as discussants, panel chairs, or interested participants, their efforts, individually and collectively, have made this a better book and their contribution to this project is gratefully acknowledged.

Russia And Eastern Europe After Communism: The Search For New Political, Economic, And Security Systems