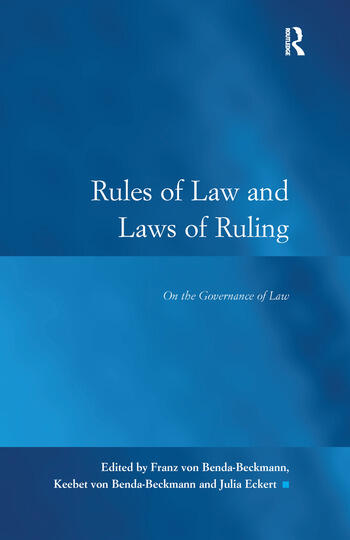 Rules of Law and Laws of Ruling: On the Governance of Law

Offering an anthropological perspective, this volume explores the changing relations between law and governance, examining how changes in the structure of governance affect the relative social significance of law within situations of legal pluralism. The authors argue that there has been a re-regulation rather than a de-regulation, propagated by a plurality of regulative authorities and this re-regulation is accompanied by an increasing ideological dominance of rights talk and juridification of conflict. Drawing on insights into such processes, this volume explores the extent to which law is used both as a constitutive legitimation of governance and as the medium through which governance processes take place. Highlighting some of the paradoxes and the unintended consequences of these regulating processes and the ensuing dynamics, Rules of Law and Laws of Ruling will be a valuable resource for researchers and students working in the areas of legal anthropology and governance.

Contents: Rules of law and laws of ruling: law and governance between past and future, Franz von Benda-Beckmann, Keebet von Benda-Beckmann and Julia Eckert; Reflections on the anthropology of law, governance, and sovereignty, John L. Comaroff and Jean Comaroff; Private military companies and state sovereignty: regulating transnational flows of violence and capital, Diana Sidakis; Laws of suspicion: legal status, space, and the impossibility of separation in the Israeli-occupied West Bank, Tobias Kelly; Ritual and rule in the periphery: state violence and local governance in a Peruvian comunidad, Monique Nuitjen and David Lorenzo; Government, business and chiefs: ambiguities of social justice through land restitution in South Africa, Anne Hellum and Bill Derman; Re-scaling governance for better resource management?, Melanie G. Wiber and Arthur Bull; The governance of children: from welfare justice to proactive regulation in the Scottish Children's Hearings system, Anne Griffiths and Randy F. Kandel; Migration and integration of 3rd-country nationals in Europe: the need for the development of an efficient, effective and legitimate system of governance, Marie-Claire Foblets; From the revenue rule to soft law and back again: the consequences for 'society' of the social governance of international tax competition, Bill Maurer; The law of the project: government and 'good governance' at the World Bank in Indonesia, Tania Murray Li; Corruption as governance? Law, transparency and appointment procedures in Italian universities, David Nelken; Index.

'The question of how governance works in the contemporary, globalized world is of pressing importance. This fascinating collection addresses the contradictory and overlapping nature of governance from the perspective of legal pluralism and anthropological theory. The book provides great insight into the forms of order and disorder now roiling the world.' Sally Engle Merry, New York University, USA '...offers the sophisticated and serious student further insight into the complex, multi-dimensional relationship that exists between state and non-state actors, law and governance, violence and order.' The Law and Politics Book Review

Rules of Law and Laws of Ruling: On the Governance of Law