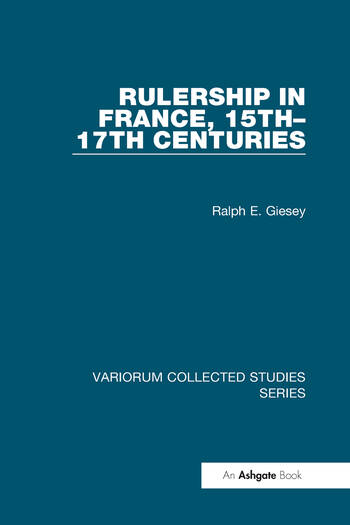 The common theme of these essays is the emergence of the modern state in late medieval and renaissance France. They examine, on the one hand, how the image of the king was enhanced in a variety of royal ceremonials as well as in the political writings of Jean Bodin and Cardin le Bret. The limits of the sovereign's authority, on the other hand, were forcefully enunciated in the works of FranÃ§ois Hotman and Théodore de Bèze. The stability of the monarchy was maintained by the noblesse de robe, a new form of hereditary nobility that virtually owned the high judicial and administrative offices they held. The last two articles are devoted, first to the author's view of the concept of the French king's "two bodies" and second to the life of his mentor, Ernst H. Kantorowicz, who wrote the seminal work, The King's Two Bodies.

Contents: Preface; The French Estates and the Corpus Mysticum Regni; When and why Hotman wrote the Francogallia; The monarchomach triumvirs: Hotman, Beza, and Mornay; 'Quod omnes tangit' - a post scriptum; Medieval jurisprudence in Bodin's concept of sovereignty; The presidents of Parlement at the royal funeral; Rules of inheritance and strategies of mobility in prerevolutionary France; State-building in early modern France: the role of royal officialdom; Models of rulership in French royal ceremonial; From monarchomachs to dynastic officialdom; Cardin le Bret and lese majesty; The king imagined; Inaugural aspects of French royal ceremonials; Royal ceremonial and the advent of absolutism; NoÃ«l de Fribois et la loi salique; The two bodies of the French king; Ernst H. Kantorowicz: scholarly triumphs and academic travails in Weimar Germany and the United States; Index.

Ralph E. Giesey is Emeritus Professor in the Department of History, University of Iowa, USA.

’Despite the great variety of these articles, they nonetheless share a focused set of historiographical concerns which lend this volume unusual coherence... Through their deeply learned, rigorous yet always creative practice of history, through their juxtaposition of close reading of legal texts, reconstruction of the social and cultural context of the jurists who write these laws and did the work of royal administration, and thick description of the ceremonial trappings of kingship, Giesey's essays serve as models for today's historians interested in deepening our understanding of the early modern monarch.’ Sixteenth Century Journal