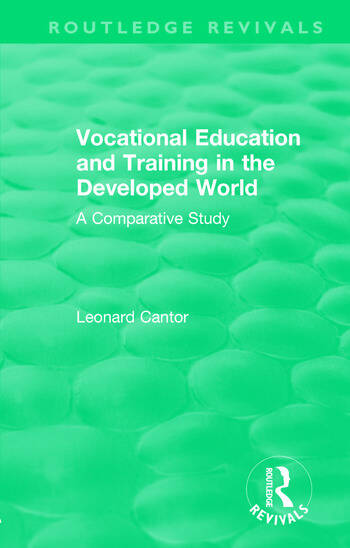 Routledge Revivals: Vocational Education and Training in the Developed World (1979): A Comparative Study

First published in 1989, this book primarily sets out to provide detailed accounts of the policy towards and the provision of vocational education and training in five countries of the developed world: Japan, Australia, the United States, the Federal Republic of Germany, and the United Kingdom. Professor Cantor concentrates on the training of skilled personnel at operative, craft, and technician levels, and describes provision both within public and private institutions, such as further education colleges, and in industry and business. Comparisons are drawn between each country, for example between the ‘British’ traditions of vocational education and training in Australia and the United Kingdom, and the more ‘entrepreneurial’ approach of Japan and the United States.

2. Australia: The Tyranny of Distance

3. The Unites States of America: A Unique Diversity

4. The Federal Republic of Germany: A Commitment to Vocational Education and Training

5. The United Kingdom: A Reluctant Revolution?

Routledge Revivals: Vocational Education and Training in the Developed World (1979): A Comparative Study