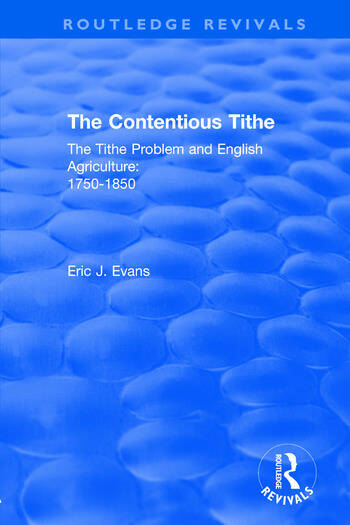 First published in 1976, this book studies the impact of a uniquely unpopular tax on English rural communities. It examines the tithe system during a period when it was subject to mounting attack from political economists, agricultural improvers and radicals alike. Professor Evans has made extensive use of ecclesiastical and estate records to explain why the tithe issue became so unpopular at this time. He also studies in detail the work of the tithe commission, offering new evidence on the important question of how much the tithe system hindered agricultural improvement. This was in a period of considerable strain for the old village community, when tithe disputes significantly added to existing tensions and, particularly in the south of England, helped bring relations to crisis point.

Abbreviations and note on spelling and punctuation

1. The Economic and Social Status of the Eighteenth-Century Clergy

2. The Nature of the Tithe Problem

4. The Mounting Pressure for Reform

5. Tithes and the Enclosure Movement

6. The Tithe Commutation Act and its Antecedents

7. Tithe Commutation and the Agricultural Interest