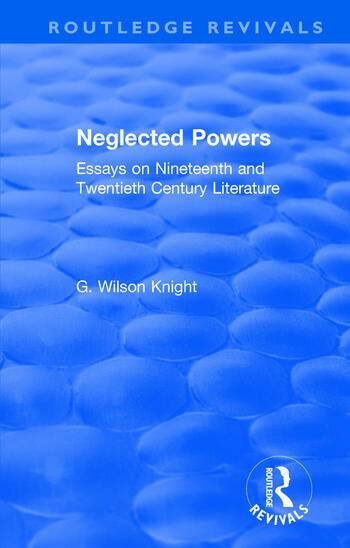 First published in 1971, Professor Knight’s book draws analytic attention to poets including Tennyson, Masefield, and Brooke, who are shown to hold a dimension of meaning previously ignored or misunderstood. Homage is paid to John Cowper Powys as one of the foremost seers of the modern age. A comprehensive review of the work of Francis Berry claims to establish him as our foremost living poet. Professor Knight urges, and goes far to prove, that modern literary criticism up until the 1970s failed to touch upon the richer meanings of contemporary literature – he stresses the relation between such acclaimed poets as Yeats and Eliot and the spiritualistic movements of contemporary times. Knight regards youth-revolts as a sign of a healthy dissatisfaction with an irreligious and directionless culture, and believes that hope lies in the neglected powers pressing for acceptance.

6. The ship of cruelty: on the lyrical poems of John Cowper Powys

15. Excalibur: an essay on Tennyson