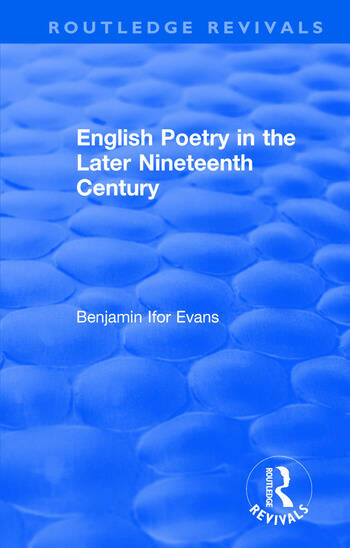 First published in 1933, this study, which underwent revision in the 1960s, is a comprehensive survey of the verse of English nineteenth-century poets whose work appeared after 1860. A special feature is the full and critical treatment of minor writers. In no other book is their work so carefully evaluated. There is a full account of the minor Pre-Raphaelites, of James Thomson, the poet of The City of Dreadful Night, of Henley, Stevenson and George MacDonald. John Davidson is the subject of a long and revealing study. Evans suggests that poetry from the late nineteenth century is neglected in scholarly study, and that Victorian Romanticism deserves more attention than it has recently received.

10. Robert Bridges and His Associates

17. Oscar Wilde, Ernest Dowson, Lionel Johnson, and the Poetry of the Eighteen-Nineties