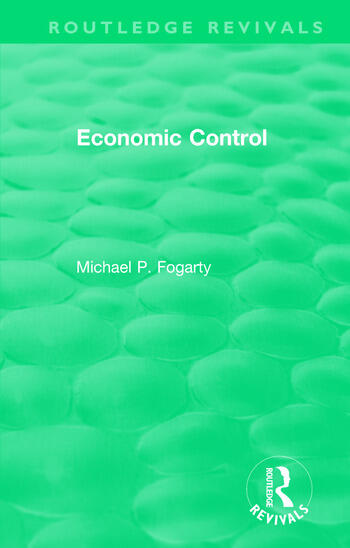 First published in 1955, this book offers a detailed history from the past to the mid-20th century on economic control. The book examines economic competition, particularly regarding the British economic system, and Fogarty looks at its scope, as well as its limits. This analysis considers working conditions in the mid-20th century, examining the impacts of industry on the life and work of the British agricultural population. The book first examines production decisions, arguing that a systematic and periodic overhaul of control mechanisms are required. Fogarty goes to give a detailed analysis on decisions about industry objectives. Ultimately, a broader look is given on the wider economic setting, and the definition of the economist is itself examined, taking into account the wider role that economics played in 20th century society.

Part One – The Problem

1. Foreword: the Problem of Control

2. The Scope and Limits of Economic Competition, Immediately Significant Decisions within a Given Social Framework

3. The Scope and Limits of Economic Competition, Immediately Significant Decisions within a Given Social Framework – testing the Effectiveness of Competition in British Conditions

4. The Scope and Limits of Economic Competition, where Competition is less effective

6. Consultation as a Form of Control

7. The Need for a Systematic and Periodic Overhaul of Control Mechanisms

9. Provision for the Future - Investment

10. Provision for the Future - Research

11. Provision for the Future – Physical and Mental Health

13. Inter-Regional and International Relations – Trade and Investment: the Role of Competition

14. Inter-Regional and International Relations – Trade and Investment: the Role of Direction and Consultation

16. The Economist and his Neighbours